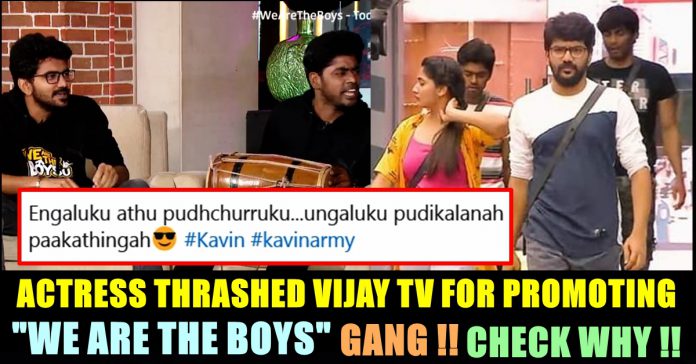 “We are the Boys” is a gang formed by the five contestants of Bigg Boss Tamil season 3. It consists of Mugen, Sandy, Tharshan, Kavin and Losliya and they spent their days inside the Bigg Boss house as a team.

Kavin went out of the house with his own wish as Bigg Boss offered 5 lakhs for the contestant who walks out. Meanwhile Tharshan got evicted on the same weak to the viewer’s shock. Now, as the season ended, Vijay Television conducted a separate episode, in a way of celebrating the “We Are The Boysu” gang. The episode was hosted by Rio Raj and Ma Ka Pa.

The show streamed on the noon of Sunday and the channel telecasted promos in its social media platforms. Check out their promos here :

On seeing these promos, Kasthuri Shankar, the one who participated in the show as wild card contestant got irritated it seems. She expressed her thoughts through her official twitter account. In her tweet, Kasthuri said “In very very bad taste. In promoting its favorites, @vijaytelevision has ended up promoting toxic fake masculinity. நான் ஆம்பள நான் ஆம்பள என்று தனக்குத்தானே ஊளையிடுவதை இவ்வளவு தட்டிகுடுக்க வேண்டாமே? You owe it our youngsters to set better standards. #BiggBossTamil @ikamalhaasan”

Kasthuri got evicted in the same week she got nominated and refused the offered “secret room”. When she came to know that she was badly trolled by Kavin & co behind her back inside the house, she slammed him.

Check out some of the reactions she received :

Wow, finally. Much appreciated ma'am. Hope u didnt turn out like some1 2 save these harassers🙏

Previous articleDirector Atlee Gets Call From Hollywood !! Here’s How The Director Replied !!
Next article“Eruma Saani” Youtube Channel Facing The Wrath Of Social Media For Their “Pullingo” Video !!