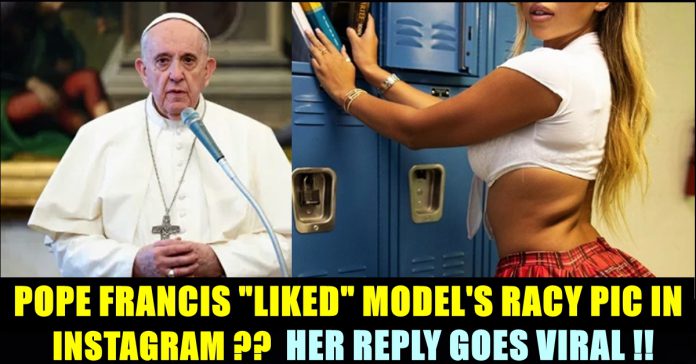 Head of Catholic church and sovereign of the Vatican city, Pope Francis allegedly “Liked” a picture of a bikini model named Natalia Garibotto. In the post which is subjected to the controversy, Natalia could be seen striking a sexually titillating pose. After the eagle-eyed social media made it public about the Instagram activity of Pope Francis’ official Instagram account, the Catholic church head made the headlines.

Being the first pope from outside Europe since the Syrian Gregory III, Francis enjoys 73 lakh followers in Instagram with 970 posts. The Instagram suggests that the Pope is following none. However, Barstool sports, a social media user, managed to spot the online indulgences of the Pope. The account shared a screen recording video to prove people that the picture was liked by the official account of Pope Francis.

It is notable that Natalia was resembling a catholic school girl in the picture by wearing suspenders. However, it is not confirmed whether the “like” was done accidentally or intentionally. Now, as soon as the news went viral, the post was unliked by the head of Catholic, Internet believes.

Most interesting part it, the model herself reacted to this bizarre. She who found the situation amusing, reacted to it by writing “At least I’m going to heaven”. Her tweet garnered 7,000 plus likes so far with hundreds of reactions from her followers.

This news had divided the micro blogging social media site into two. While many people are making fun of the situation, a set of people are calling out the “Pope”. People also criticizing the twitter user who made the online activity of Pope public.

Yoooo even no nut November got to Pope Francis

Prolly tried to zoom in on dat ass with a double tap. Old man is used to checkin out strange on the Facebook

That’s my kind of Pope pic.twitter.com/6e1loh9Zex

Many users linked the incident with a statement provided by Pope earlier this year. He said that having “good sex” and “food” are divine pleasures that directly comes from god. “Pleasures arrives directly from God, it’s neither Catholic, nor Christian, nor anything else. it’s simply divine” he reportedly said. 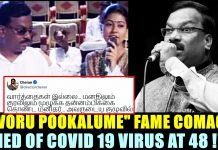