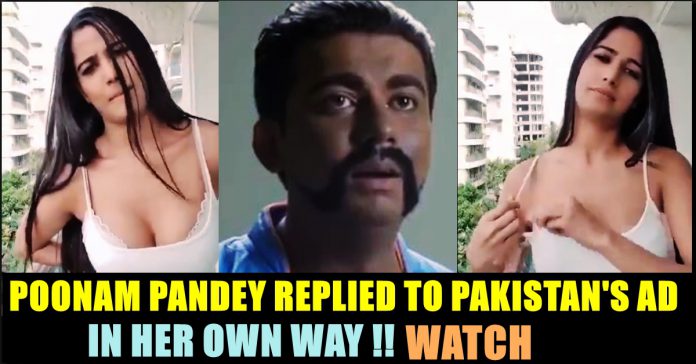 Recently, an advertisement which was released by Pakistan’s Jazz TV, created a lot of hype on social media.

Mocking Wing Commander Abhinandan, the ad shows a model who was made to look like the IAF officer with his trademark moustache, wearing a Blue jersey, and holding the ‘tea cup’ answering questions on camera.

At the end of the video, taking a dig the person behind the camera says “Chalo, you can leave now, but ek second ruko cup kaha leke jaa rahe ho?”

Poonam Pandey who is an Indian glamour model and film actress, known for her works in Bollywood and Telugu cinema, has now came up with a reply to the Pakistani ad. Regarding the ad, Poonam speaks about why to settle for a teacup, when you can have a double D. While saying this, she takes off her inner wear. She is seen saying “Why settle for a tea cup, when you can actually have a D-cup, a double D-cup? You can even have tea in it.” in the video.

The social media sensation has over and over again shown that she is a big cricket fan and supports the men in blue to the hilt. Meanwhile, the match between India and New Zealand at Trentbridge got called-off without a ball being bowled due to persistent rain. Both teams shared 1 point each. This is the fourth match in two weeks that has got abandoned without a ball being bowled.

My Answer to the Pakistani AD. #INDvPAK World Cup 2019. pic.twitter.com/cw6eZWB3wv

Poonam is known for making extremely bold videos and photoshoots. In fact, she had risen to fame by announcing that she would pose nude if India won the 2011 World Cup. Although India won the title, she eventually did not perform the stunt saying that BCCI did not permit her to do so. However, this act had given her instant fame.

She had recently posted some semi-nude photos on social media to cheer for India’s victories in the last two World Cup matches. Well, this diva certainly knows how to hog the limelight.

Check out some of the reactions for Poonam’s reply video :

Poonam Pandey. I love your guts. You are one of those diehard, who lives and dies for your mother land. It is not your action, but the attitude you display is praiseworthy .

“why settle for a tea cup when you can have a D cup”
I love Poonam Pandey.

Poonam Pandey just earn my respect.. U r far better than those Bollywood actress who never speak in such matter and Use some incident like #kathua as hes film marketing…..

Poonam Pandey thinks removing her clothes is the answer to everything, she is bloody right.

What do you think on this act of Poonam ?? Comment your views below !!

School Girls Performed For Republic Day & Check What Did This Cop Did !!

Pramod Walke, a police constable from Nagpur, was suspended from work after a video surfaced of him showering money on a group of young...

“Prince” Of SK Getting Massively Trolled After Release!!

The most expected "Prince" of emerging star Sivakarthikeyan became a victim of massive trolls and criticism after release. Movie reviewer Prashanth gave 60 marks...