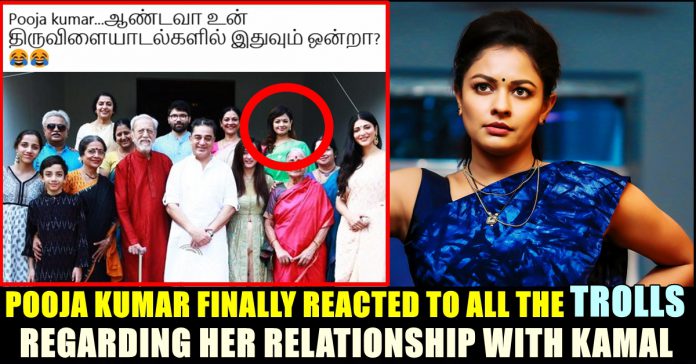 Actress Pooja Kumar opened on her relationship with Kamal Haasan for the first time in an interaction with a popular youtube channel. Kamal Haasan, being one of the finest actor in Indian cinema history, is currently busy in managing his political party Makkal Neethi Maiam. The 65 year old filmmaker’s personal life has always been under scanner as he is a cinema celebrity since he was 3 years old. Now, people who are using online media platforms are speculating that the actor is in relationship with actress Pooja Kumar with whom he acted in three films.

After winning the title of Miss India USA, Pooja Kumar started her global career as an actress, producer, and model. She appeared in a small role in a hollywood fame named as “Brawl in the cell block 99” and also acted in few other films. Apart from her film appearances with Kamal Haasan in Vishwaroopam, Uthama Villain and Vishwaroopam-2, the actress was seen with him in few public events which made netizens to create rumours saying that they both are involved in romantic relationship.

At OTA for special screening of #Vishwaroopam2 with @poojakumarny styled by @amritha.ram clothes by #ArchitaNaryanam

Im lucky and so is the rest of the Indian film industry to be learning from these two legends! It’s truly a remarkable accomplishment to be working for so long and still going strong! Perseverance is the name of the game! #rajnikant and @ikamalhaasan #ulaganayagan #tamilcinema #telugucinema #films #worldcinema #movies #chennai

One incident which made their speculation strong is when Pooja Kumar attended the family function of Kamal Haasan in his ancestral home at Paramakudi in Ramanathapuram district. In a particular picture that got release we could see Chaaru Haasan, Shruthi Haasan, Akshara Haasan, Suhaasini and others. But who grabbed the attention of the Netizens the most is actress Pooja Kumar.

Her presence in this picture made netizens to raise their eyebrows.Many trolled them with various kind of reactions. Check out some of them below :

How is pooja Kumar related to Kamal’s family? https://t.co/ITx84h9Ugb

Now, after nearly 6 long months since the release of this picture, the actress responded to these speculations by answering to a question asked to her in a recent interaction. She said that she participated in his family function only due to knowing Kamal Haasan and his family for a long time. Mentioning Kamal Haasan as “Sir”, Pooja said “I have just known Sir and his family only because of all the movies I have done. It’s been great for me to interacting with him as an artist and as a director. I have just known them for so long. I just know their family pretty well just because we worked together for so long” she said.

Pooja Kumar also updated that she is not in Kamal Haasan’s upcoming film “Thalaivan Irukkinraan”. Apart from these she also shared many things including her visit to the premiere of “Hey Raam” in sathyam theatre.

Previous articleAishwarya Gets Emotional While Recollecting Her Earlier Days !! WATCH
Next articleRaiza Replied To A Guy Who Asked Her “Body Pic” ??

Actress Hits Back At A Journalist Who Asked A Misogynistic Question About Her To Her Co-Star!!

In the trailer launch of upcoming Telugu film "DJ Tillu", actress Neha Shetty had to go through an embarrassment due to a question asked...

This Indian Village Does Not Allow Girls To Go To School Because Of This Reason !! SHAME !!

Even today, menstruating girls are not just forbidden from the kitchens and the temples, but are being forced to skip schools. According to a...

Prasanna Lara who is widely known as a cricket analyst, worked as an analyst for Indian Hockey team prior entering cricket and in a...