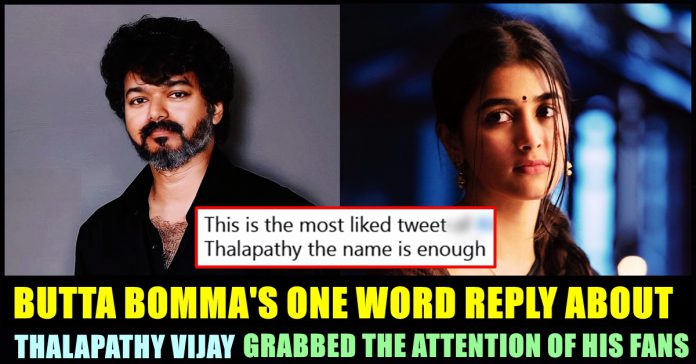 “Beast” heroine Pooja Hegde’s one word reply about “Thalapathy” Vijay with whom she is going to share screen space in the upcoming “Beast” left fans of the latter to go crazy over it. Pooja who felt that one word is not enough to describe him after a fan requested to do it, said that the actor is “Sweetest”. The reply tweet became the most “loved” one among all the reply tweets she made to her fans during the question and answer session she conducted. The actress also answered to a number of other interesting question of her Twitter followers on Monday.

Actress Pooja Hegde who is known among Tamil audience for acting in Mysskin’s “Mugamoodui”, is pretty much busy acting in the films that are being made in Telugu film industry. After a long time, the actress is going to make her come back through Vijay’s most expected “Beast” directed by Nelson Dileep Kumar of “Doctor”, “Kolamaavu Kokila” fame. She who is enjoying a huge number of followers in social media platforms, recently conducted a “question and answer” session with her Twitter followers during her free time.

“Have some time on hand…let’s do a quick #AskPoojaHegde” the actress said and a fan asked her to tell one word about Vijay. Replying to him, Pooja said “One word is not enough..but….I’ll try…ummm… SWEETEST” in her tweet. Check out her tweet below :

In no time, the tweet garnered 16 k likes which is highest compared to all the answers she made in her “Ask Pooja Hegde” session. Check out some of the replies she received from Vijay fans below :

This is the most liked tweet of #AskPoojaHedge …. Thalapathy the name is enough

Pooja also answered to some other questions like whom she wish to share screen space in future and to a fan who described her growth as “luck”.

Here’s some of the answers she made :

Just a question… at what point does it become hard Work and choosing the right scripts? Besides the fact of being blessed also. Just asking 🤷🏻‍♀️❤️ #AskPoojaHegde https://t.co/CfDgmQeZDF

With the one and only @SrBachchan sir. Hope this comes true someday 🥺 https://t.co/5XshS1CwCD

It was definitely a challenge in the start, I remember the times I didn’t have work..but I feel like if you put your heart and soul in your work and work hard, it comes back to you manifold. #AskPoojaHegde https://t.co/AhR89xa8kr

Can’t wait for you all to see it, it’s visually SO beautiful. Such beautiful moments in the song. #AskPoojaHegde https://t.co/NdX5emQr88

As said, Pooja Hegde who acted in Mysskin’s “Mugamoodi” is now very much busy acting in Telugu film industry. Her “Butta Bomma” song with Allu Arjun became a massive hit country wide. Having handful of Telugu films, Pooja Hegde is also expected to act in a number of other Tamil films apart from “Beast”.

Followed by a number of cinema celebrities and television personalities, Vantha Vijayakumar who is known for her bold statements and outspoken attitude, reacted to...

Cheran Got Extremely Angry On Government After Seeing This Meme !! Check Why!!