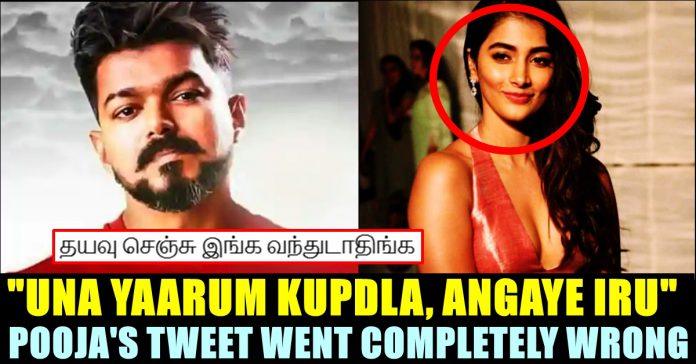 Actor Vijay who was last seen in Atlee’s Bigil, is about to appear in Lokesh Kanagaraj’s “Master” in coming April. Now the most talked about topic among Vijay fans is about who is going to direct the next film of their favourite actor which they call as “Thalapathy 65” and who is going to pair with him in it.

Some say that the film is going to be directed by Atlee again and others say that director Perarasu who made Vijay’s “Thiruppachi” and “Sivakasi” is going to be roped in. A recent report said that “Iruthi Suttru fame” Sudha Kongara is going to direct Vijay in his next. However, some sources denied the news and the most latest report has said that the sequel of Vijay’s blockbuster film Thuppakki is going to be his next.

As far as heroines are concerned, Telugu young sensation Rashmika Mandanna and Pooja Hegde who acted in “Mugamoodi” are two of the front runners who are expected to pair with Thalapathy. Fans of actor Vijay are tagging these two actresses in Twitter to shower their love, in a belief that they are going to pair their idol in his next. Pooja Hegde who all the tweets of the fans, took time to write a lovely message to the fans of Tamil cinema.

In her tweet, the actress said that she waiting for a script that excites her to act in Tamil. However she assured the fans to meet them soon through big screens. “Been reading all these tweets from fans on wanting to see me in Tamil cinema. I am so pleasantly surprised and touched to see this love. I promise you I am working on it. Just wanted to do a script that excites me, hence the delay/gap but you will c me soon. LOVE YOU.” tweet of the actress read.

Been reading all these tweets from fans on wanting to see me in Tamil cinema. I am so pleasantly surprised and touched to see this love. I promise you I am working on it. Just wanted to do a script that excites me, hence the delay/gap but you will c me soon. ❤️😘 LOVE YOU. ❤️

On seeing this tweet, few fans of Tamil cinema got irked as the actress said that she awaiting for a script that excites her. “Yes all the scripts you done so far in Telugu are quite exciting.. “ wrote one fan in a sarcastic tone. Check out some of their reactions below :

An employee falling in love with Employer after seeing her bare legs in Short Skirt. Is this the kind of shit character that excites you? https://t.co/bDu463Lc3n

Music Maestro A.R Rahman, while interacting with a famous new portal, expressing his strong views about the remix culture. The musician said that he...