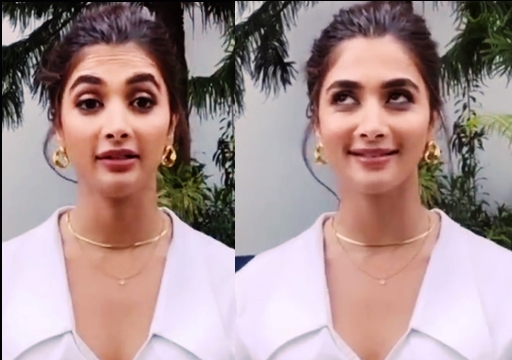 Pooja Hegde who played the role of lead actress in Vijay’s upcoming film “Beast”, interacted with the fans and answered to their questions regarding the Vijay-starrer ahead of the film’s release which is scheduled on 13th of April. From sharing about how she felt while travelling in the Rolls Royce car of the actor to reacting to his compliment in the “Beast” special interview, Pooja answered to many questions of fans through her official Instagram handle.

Q: About the rolls royce ride which is been trending all over today ! Your experience mam #Askpoojahegde #Beast
– @AnirudhianF

Here’s the videos of Pooja and the other crew members of “Beast” travelling in Vijay’s Rolls Royce :

Talking about returning to Kollywood after a decade, Pooja said that she is super excited to start her journey in Tamil industry where her journey of acting career started. The actress was debuted through a movie named “Mugamoodi” directed by Mysskin. “I’m happy to be coming back with “Beast”. I hope Tamil audience loves me, enjoys my performance and loves my films” the actress said.

Q: How’s the feeling of returning back to Kollywood after a decade? #AskPoojaHegde #BeastQnA #Beast
– @prayushkhanna12

Further, Pooja thanked Vijay for lauding her professionalism and dedication through his recent “Beast” special interview. She named dance choreographer Sathish, VTV Ganesh and Nelson Dilipkumar as the most entertaining personalities in the sets.

Hey @hegdepooja, Thalapathy in his recent interview with @SunTV said that you are very PROFESSIONAL and DEDICATED actress. How was your reaction to it coming from a huge star like Thalapathy ?
– @TamsterzTJ

Q: #AskPoojaHegde #BeastQnA who is the most entertaining person in the sets of #Beast @hegdepooja
– @pk_thamizhan3

When a fan asked Pooja to tell about what are the take aways for her from Vijay personally and professionally, the actress said that the way he is chilled out at the sets and his work ethics are admirable. Pooja also shared about how she felt during the first day of shoot and last day of shoot to her followers.

What will be your take away from @actorvijay personally and professionally..?

After #Beast Who is your favorite actor from Complete South Indian cinema..??
– @its_TeamBEAST

Q: What did u feel when coming to #Beast shooting first day and leaving the set last day? 😊😊#AskPoojaHegde #BeastQnA #Beast
– @Anjaani_VFC

Q: #Askpoojahegde can you reveal your birthday celebration moments in #Beast set ..& how was the experience to act with @actorvijay #Beast
– @pradeepvjvk

Q: To whom the Word #Beast Suits the Best in Real Life ?

Ticket bookings of “Beast” is going on in full swing. The trailer starts with the voice over of veteran filmmaker Selvaraghavan who played a character in the film. He starts narrating the story of the film and also introduces Vijay’s character to the audience. The film is about terrorists hijacking a shopping mall and actor Vijay who is described as “one of the best and most notorious spies India ever had” getting trapped in it with public.

Asuran film of Dhanush and Vetri Maran has been running successfully in theatres for 100 long days as of today. The crew celebrated the...