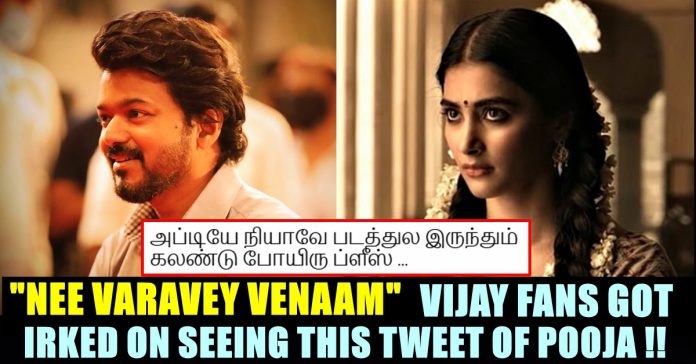 Pictures of the Pooja event of actor Vijay’s upcoming film which is tentatively titled as “Thalapathy 65” are doing rounds in social media platforms with reactions aweing the actor’s new look for the Nelson Dilipkumar directorial.

The official twitter account of Sun pictures released the photos by tagging the lead actors and prominent technicians of the film.

Despite of the new pictures of actor Vijay that got released in the social media platforms, fans of the actor got a bit disappointed due to the absence of Pooja Hegde. She who couldn’t attend the event due to her hectic shooting schedule, got slammed by the fans of actor Vijay.

On 24th of March, it has been officially announced that Pooja Hegde is going to pair opposite to Thalapathy Vijay in “Thalapathy 65”. Making the announcement public, Sun pictures wrote “The gorgeous Pooja Hegde onboard as the female lead of #Thalapathy65 !” by releasing a video specially made for her.

Pooja Hegde made her first appearance in Tamil cinema industry by acting in Mysskin-Jeeva’s “Mugamoodi” which became a box office dud. Fans became extremely happy on seeing the actress taking part in the film as heroine as they are going to witness a fresh pair for Thalapathy Vijay for the first time since long time.

It is notable that Pooja Hegde was in talks to pair with Vijay during “Bigil” pre production. However, Nayanthara ended up bagging the lead role. Reports also emerged saying that Pooja is going to act in Suriya-Hari’s film “Aruva”. The project got dropped and actress denied the news as well.

Now, after missing out the event of “Thalapathy 65” Pooja event, the actress came up with a tweet saying that she is in shooting elsewhere. However, the actress said that her heart and spirit is with the Thalapathy 65 team and expressed her wish of joining them soon.

“Missing out on the muharat puja today of #Thalapathy65 since I’m shooting elsewhere. But my heart and spirit is with the team. Good luck can’t wait to join you’ll soon” read her tweet.

Missing out on the muharat puja today of #Thalapathy65 since I’m shooting elsewhere. But my heart and spirit is with the team. Good luck ❤️ can’t wait to join you’ll soon 💃🏻💃🏻💃🏻

However, a number of fans got upset and started expressing their disappointment through their reply tweets. A fan said that he doesn’t want her to be like Nayanthara who usually denies to attend the promotional events of the movie she acts. Another one wrote “Is it possible to miss the whole movie? Kindly do it.” to vent out his emotion.

Is it possible to miss the whole movie? Kindly do it.

There is no option to dislike, otherwise it will became
Most dislike tweet in India 😡

When Chennai Ambulance Drivers Became The Heroes Of Mizoram !!

A 28 Year old youth named as Vivian Remsanga who belongs to Mizoram's capital Aizawl, expired in Chennai on 23r of April due to...

Producer Gnanavel Raja who is responsible for his production house Studio Green, is known for producing many films in Kollywood such as Singam 3,...