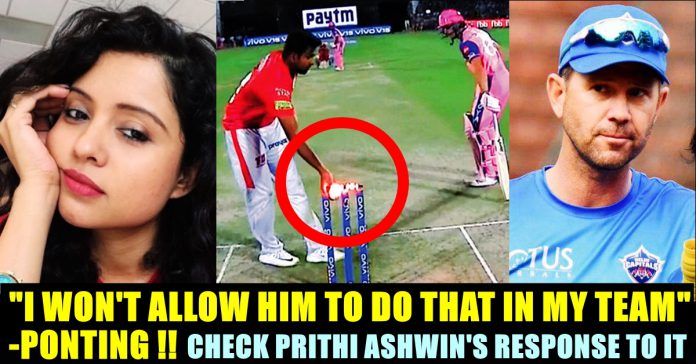 Former Australian captain and current couch of Delhi capitals Ricky Ponting made the headlines on 19th of August after he said that he will not allow Ravichandran Ashwin to “mankad” non-strikers as Ashwin, who captained Kings 11 Punjab last year, is going to play for his Delhi capitals from this year. The open statement from the successful former captain of Australia made every cricket fan to react, including the wife of Ravi Ashwin.

Ponting who feels that it is not within the “spirit of the game” said that he will have a chat with the cricketer first. “I’ll be having a chat with him about “Mankading”, that’s the first thing I will do. That is going to be a hard conversation that I will have with him. I think. he will say that was within in the rules and he’s right to do it” said Ponting who added that it will not happen in his team.

{But I must admit, after watching the last season, as soon as it happened, I actually sat our boys down and said, “Look, I know he’s done it, there’ll be others around the tournament who will think about doing this but that’s not going to be the way that we play our cricket. We won’t be playing like that” Ponting said in the Podcast.

This news blew up as many people who keenly watch cricket reacted in various ways. A set of people supported Ashwin who stated that the illegal advantage the batsmen effortlessly taking costs him expensive overs as they are easily converting ones into twos while doing that. However, other set of people supported Ponting saying that it is not the spirit of the game.

The most important and hilarious response came from the wife of the West Mambalam based cricketer. Prithi Ashwin who is pretty much active in social media platforms said that she became the “Bulter” on that night after that headlines surfaced. “That That Man That That Problem” her hashtag read. “Last evening with beau Ashwinn before he leaves for the IPL, which is basically forever. But the headlines made me ‘The Butler’ for tonight. #mytimeranout #thatthatmanthatthatproblem “ her tweet read.

Last evening with beau @ashwinravi99 before he leaves for the IPL, which is basically forever. But the headlines made me 'The Butler' for tonight. #mytimeranout #thatthatmanthatthatproblem 😂

Check out her other tweets below :

.@ashwinravi99 do we still have an inside joke?

Next 2 months that only.

Check out some of the reactions to her tweet below :

hope he didn't mankad'ed you 😂

This hashtag got me good😂

Comment your views on Ponting’s statement and Prithi’s response to it !!

Previous articleFemale Student Accused Male Faculties Of Her College For Their “Sexist” Mindset !!
Next articleFor The First Time A Tamil Word Mentioned In US Democratic Speech !! WATCH

On the wee hours of 14th May, actor Ramesh who is popularly known as "Kutty Ramesh" passed away at a private hospital in Chennai....

Chennai Man Booked For The Way He Treated A Sanitation Worker !!

For abusing a lorry driver who works in sanitary department, a man named as Chandrasekar has been booked under Indian Penal Code section 294...

The purpose of Your Story's existence is to evaluate, expound and showcase the awesome spark of creation in every entrepreneur and changemaker. Their passion for...