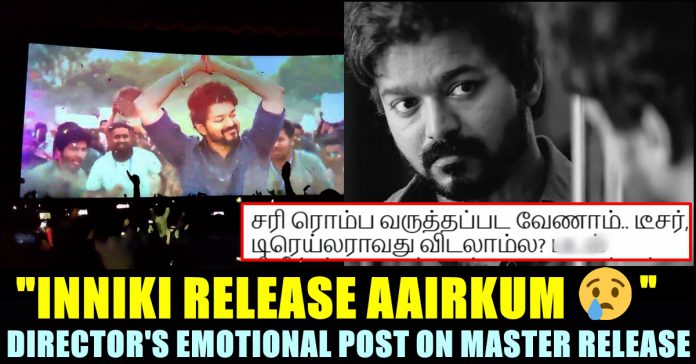 Director Rathnakumar who works in “MASTER” as an additional screenplay writer and dialogue writer came up with an emotional post to express his disappointment regarding the interruption in the film’s release due to Corona outbreak. Indian film industry hasn’t seen a single release in past 1 month due to the lockdown announcement from central government. Initially Master was widely believed to release on 9th of April.

Director Rathnakumar is having a tough time in Twitter since he signed Lokesh Kanagaraj’s “Master” to work as a writer. Fans of actor Vijay who has potential to trend a hashtag worldwide in Twitter are storming onto the posts of the director only to demand updates about their favourite star’s upcoming film. Being an ardent fan of actor Vijay, Rathna who directed Meyaadha Maan and Aadai, penned an emotional post on 8th of April regarding the film’s release.

Rathnakumar said that the film would have been released now if the outbreak didn’t happen. He mentioned the struggles faced by the film since the first day of shoot. The film’s shoot initially got interrupted due to the pollution in Delhi. However the crew managed to complete the schedule. After that BJP party members protested against the film’s shooting in Neyveli. The Master shooting also got interrupted due to IT Raid on actor Vijay.

Mentioning these issues, Rathnakumar wrote “Master would have released by now if #CoronaOutbreak didn’t happen. Can see lot of sad tweets, As a fan it hurts big. Pollution, Protests, Raid & now this. Anyway we will have the last laugh. Survival First, Celebrations Later”
He added the selfie picture captured by actor Vijay on Master audio launch and said “Suddenly this selfie looks Nostalgic”

#Master would have released by now if #CoronaOutbreak didn't happen. Can see lot of sad tweets, As a fan it hurts big. Pollution, Protests, Raid & now this. Anyway we will have the last laugh💪😊.
Survival First😷
Celebrations Later 🎉🥳
Suddenly this selfie looks Nostalgic😌😍 pic.twitter.com/bBRqjBRePI

To this post, many of the fans of actor Vijay asked Rathnakumar to give an update on the teaser oor trailer of film to make them happy. Check out some of their reactions below :

No Song Update Any Teaser or Trailer update please

Directed by Lokesh Kanagaraj, the film has ensemble cast including Vijay, Vijay Sethupathi, Malavika Mohanan, Arjun Das, Shanthanu, Gouri Kishan and others. The makers had released 3 looks and 4 lyrical videos so far. The audio launch of the film took place a week before the Corona outbreak took place.

Superstar Rajinikanth announced that he is not going to enter politics due to his health issues. The actor released a press note saying that...

A youngster was found battling for his life near a dumpster in the Chengalpattu municipality having sustained heavy blood loss. The incident came to...

It has been reported that the water from Chembarambakkam lake is going to be released by the noon of Wednesday. The lake's depth crossed...