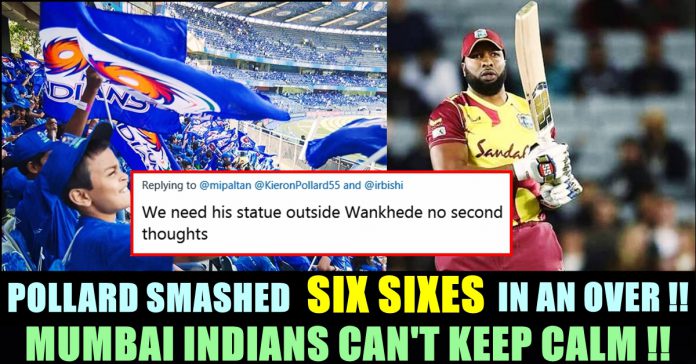 West Indies captain Kieron Pollard smashed six sixes in an over and officially joined the club of Yuvraj Singh and Herschelle Gibbs who were the only two players to hit six sixes in an International match’s single over. Sri lanka spinner Akila Dhananjaya who picked a brilliant hat trick, went for 62 runs in the four overs he bowled with an economy of 15 runs per over.

With this feat, Kieron Pollard became the second batsman in t20 internationals and third overall. The first delivery of the over disappeared over cow corner. The second was powered straight to the sight-screen and the Caribbean captain targeted long-off on the third delivery and went over deep midwicket for the fourth. He smashed a half-tracker over long-on on the fifth delivery and went over deep midwicket again to complete the six sixes.

Pollard becomes 3rd to hit 6 Sixes in an over 😍 pic.twitter.com/bkIDJmPLts

West Indies comfortably won the match with four wickets in hand. Entire cricket fraternity wished the cricketer for this immense achievement. The official twitter handle of Mumbai Indians, with whom Kieron Pollard is being collaborated in the Indian premier league, came up with a special tweet to celebrate his achievement.

“6OAT. He came. He saw. He smashed! OneFamily #MumbaiIndians @KieronPollard55” read the tweet of the twitter handle.

Fans of the defending champions are also got excited on seeing the batting performance of the cricketer and are expecting him to deliver in the upcoming IPL season which is schedule to take place from next month. “We need his statue outside Wankhede no second thoughts” a fan girl wrote to express her emotions whereas another fan said “Best t20 player right now. Guy is so much underrated just cz he plays for Mi probably.”

My God
Pollord just killed Dananjaya
A day to remember/forget
Took a hat-trick & conceded 6 sixes in one over, talking about Cricket is a great leveller, this is as good as any @YUVSTRONG12 Gibbs you have company of @KieronPollard55

Akila Dananjaya took a hat-trick in the 4th over and then Pollard hit him for 6 sixes in the next over – It never happened before in Cricket History 🔥#WIvsSL pic.twitter.com/ycee0kfQya

#WIvSL
1. Dananjaya after taking a hat-trick in his 2nd over.

2. Dananjaya after getting hit 6 6's in his 3rd over by Pollard pic.twitter.com/3Rk42vmF4g

Comment your views on this batting display of the West Indies skipper !!