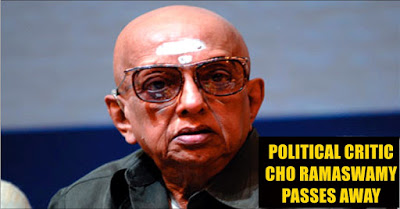 A person who was known to be very close to Jayalalitha also sharing a friendly relationship with her had his final breath at a Chennai Hospital on the early hours of December 7,2016.

The 82 year old veteran writer was admitted to the Apollo Hospital in Chennai last week. After complaining about a Chest Pain he was admitted to the Intensive Care Unit on the early hours of Wednesday after when he suffered a heart attack and succumbed to it.

Cho Ramaswamy or Cho after which he was fondly called as died due to a heart attack. The one which also took his close associate’s life. He was unwell for quite some time. Jayalalitha visited him on August last year, an instance when he was admitted to the hospital assuring him he’d get well soon. Throughout his career spanning several decades, he was known to be very close to Jayalalithaa, and shared a friendly relationship with her. Cho played an instrumental role in Jayalalithaa’s political career. He had been a trusted advisor for several decades and shared the common cause of fighting their ‘nemesis’ M Karunanidhi. Cho had known Jayalalitha for almost 60 years, right when she was a small kid. He has provided her with counselling and encouragement at various points of her life also being a huge critic at certain times. Though all this they shared a mutual friendship which transcended politics and public life.