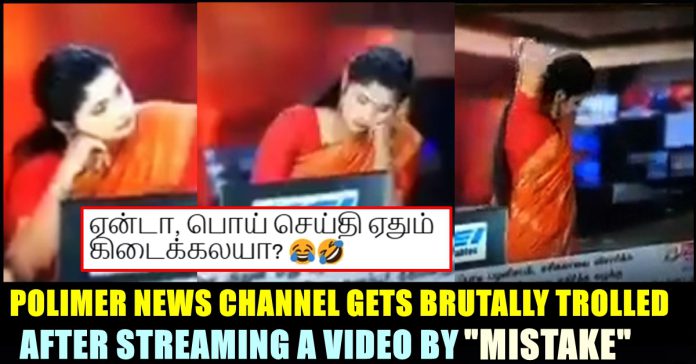 A 2 minute long video of a news anchor who is working in Polimer news channel, waiting for her cue is trending the social media platforms with netizens making fun of it. Polimer news channel is very much known among the Internet audience for the way they present their stories. The funny phrases and the humorous examples they utter while reporting about the crimes that took place in the state, has gained them 65 lakh subscribers in youtube and a large amount of Television viewership as well. Reporter Vel raj of Polimer news channel enjoys a separate fan base in Internet for his voice and modulation alone.

Now, the news channel, mistakenly streamed a 2 minute long video of a female news reader waiting for her cue and netizens had enough time to shoot it and circulate it as a video in the social media platforms to make fun of the channel which made fun of many cinema celebrities, politicians, political parties while making reports.

The video is a recording of a group of men who could be heard making fun of the channel for making this blunder. In the video, the news anchor could be seen sitting relaxed and surfing her cell phone. After a point, she could be seen standing up from her seat and adjusting her hair and surprisingly there was no reaction from the channel management about invading the telecast with advertisements or the clippings of any of the news.

Tagging the official twitter account of the channel, a Twitter used wrote “Why ?? Didn’t get any fake news to spread ?” to troll the channel with many others making similar comments. “Today mistake by polimer news They relayed in studio activity Mistakes do happen But 2 minutes is too long a time.” said a twitter user.

Today mistake by polimer news They relayed in studio activity Mistakes do happen But 2 minutes is too long a time. @dinamalarweb @polimernews pic.twitter.com/0pNSNS17jZ