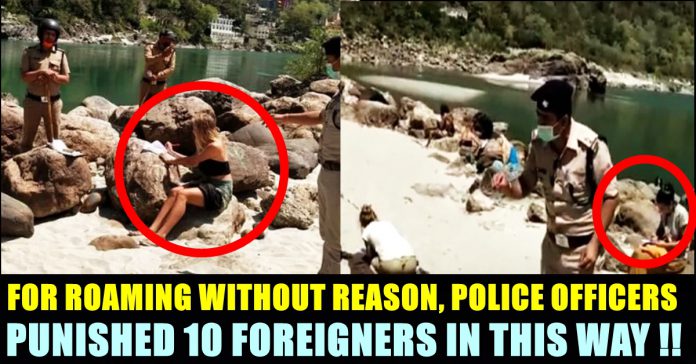 When the entire country is under lockdown, 10 foreigners roamed in tourist places of India like it is yet another normal day. Police officers of Uttar Pradesh gave them a unique punishment to make them realize about the seriousness of the situation. The incident took place near Ganga River in Rishikesh. According to reports, the foreigners are from Israel, Australia, Mexico and from some other European countries.

The police officers demanded the 10 foreigners to write down, “I didn’t follow lockdown, I am sorry” at least 500 times after giving each of them a piece of paper and pen. The incident exactly took place on the afternoon of Saturday, in Tapovan area, one of the most popular tourist place in Rishikesh.

“The police had been getting reports that some foreigners were defying the lockdown and coming to the Ganga stretch from Neem Beach till Sai Ghat in Tapovan to chill.” said Vinod Kumar, a police officer who is in-charge. “Based on the inputs, on Saturday, I along with some other personnel of my check post decided to patrol that stretch during which we found 10 foreigners strolling there,” he added.

When the police officers asked those foreigners why they are roaming without any proper reason, the foreign tourists reportedly said that they could go out from 7 AM to 1 PM when the lockdown is relaxed. Vinod Kumar further explained the foreigners that the lockdown relaxation is meant only for the people who wants to buy essentials and not for those who wants to go out without any reason. “They said that they are not aware of that” Vinod said to the media.

Vinod, to punish them, asked one of his men to bring 50,60 blank pages from the check post. “I gave 5 pages to each of them and asked them to write “‘I did not follow the lockdown. I am sorry’ 500 times as punishment,” Vinod Kumar added who gave them a stern warning to them not to violate the lockdown rules next time.

“If they refused to do so, I told them that they will be blacklisted from entering India again. They agreed to the punishment and wrote 500 times at the spot. Then I asked them to leave with a stern warning and told them not to venture out without a reason” he said. “At present, despite the lockdown, there are at least 650 foreigners in the area but during the normal tourist season the number goes up to 2,000-3,000.” he told to the media about the number of foreigners still present in the area.

Video of the same is going viral in social media platforms with various kind of reactions. Comment you views on the way Vinod handled those foreigners.

Previous articleNot Pandiraj, This Popular Actress Was Supposed To Introduce Sivakarthikeyan !!
Next article“Draupathy” Director Facing The Wrath Of Vijay Fans !!