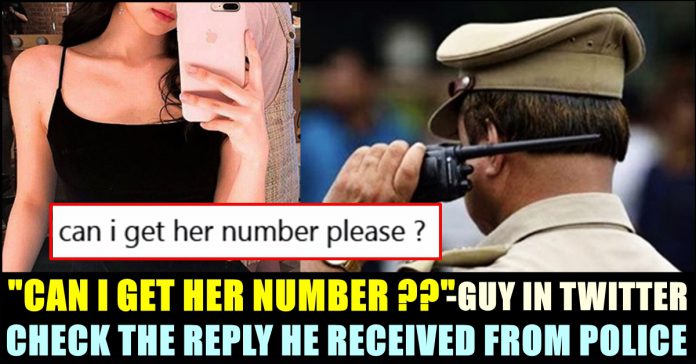 The twitter handles of police administrations in Indian country are very much known for their witty replies to the citizens, especially to those who are tweeting in a way of making trouble. Recently, a girl in twitter tagged the official twitter handle of Pune police and asked for the contact number of Dhanori police station.

@PuneCityPolice Can I get the number of Dhanori police station please. Need urgently!

This quick response from the twitter handle received many positive reactions from the users of the micro blogging social media site. Meanwhile a user named as “Chiklu” replied in the comment section of the Pune Police’s tweet by asking the contact number of the girl by whom it all started.

He had the courage to write “can i get her number please ?” in his reply tweet of Pune Police.

@PuneCityPolice can i get her number please ?

In a way of responding to this tweet, they posted a reply to Chiklu which received more than fifteen thousand loves so far. The Pune Police asked Chiklu to send his phone number in direct message. They wrote “Sir, we are more interested in your number currently, to understand your interest in the lady’s number. You may DM. We respect privacy.”

Sir, we are more interested in your number currently, to understand your interest in the lady’s number. You may DM. We respect privacy. https://t.co/LgaD1ZI2IT

This tweet also received hilarious reactions from the users of all direction in Twitter. Another user said that Chiklu is a potential eve teaser who should get beaten in public to which Pune Police said that he must be kidding. They requested the tweeter not to make another irresponsible tweet in an attempt of getting him a punishment.

Sir,he must be kidding but we will make sure he gets the seriousness of it. We request you to not make another irresponsible statement in reply to the first. We are here to take care of law & order, citizens do not need to let the hand loose on streets. Trust us & let us know https://t.co/XA7WPF6iAa

Meanwhile Chiklu also replied to the tweet of Pune police. He says that he just wanted to help the girl but police took it to another direction.

Being an indian and responsible citizen i wanted to help that girl but you took that conversation in wrong direction 😏 https://t.co/hEqoDbSEag

What do you think on this reply of Pune Police going viral across the country ?? Comment your views below !!

Swiggy has been in trouble more than once, and they seem to be doing nothing to improve the situation. This time, Swiggy seems to...