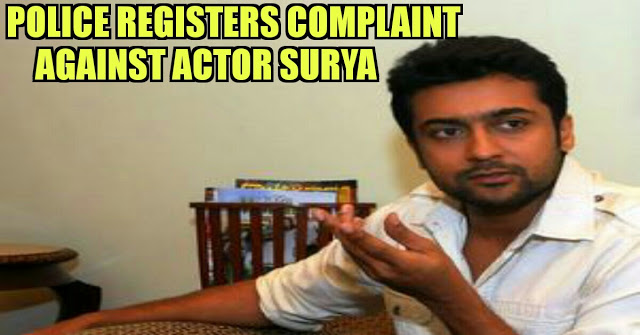 A 20-year-old football player lodged a police complaint claiming that he was slapped by actor Suriya in Adyar on Monday evening. According to police, U. Premkumar, a first division football player and his friend Lenin were heading from Broadway to a football ground in Adyar. Lenin on the bike and Praveen riding pillon hit a car going in front of them when it stopped suddenly. “Unable to control the bike, he hit the car from behind. I was thrown into the air on the impact,” claimed Premkumar. He said a woman driving the car stepped out and began scolding them. “Some shopkeepers questioned the woman, as we were not at fault,” Praveen claimed. Actor Suriya, who was passing by, stopped his car and came in support of the woman. Premkumar claims that Suriya slapped him and asked him why he was fighting with a woman on the road. The youth lodged a complaint at Shastri Nagar police station.