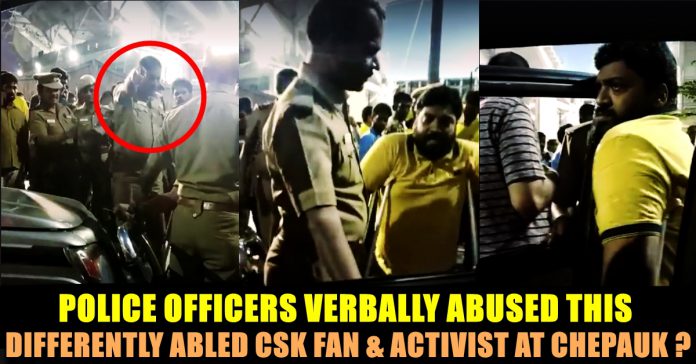 The craze for IPL is increasing day by day as the tournament is progressing towards the finals. Among the 8 teams which are participated, now only three teams have the probabilities to win the trophy. Mumbai Indians sealed their spot in finals where as Chennai Super Kings and Delhi Capitals are going in compete in the Qualifier 2 tomorrow which is scheduled to take place in Vizag.

The Qualifier 1 took place at Chepauk where enormous number of fans from Tamilnadu went to the stadium to witness the match. Deepak Nathan is one among the ardent fan who went to stadium for the first time in his life with the help of his brother-in-law who arranged ticket for him and his wife.

Deepak nathan is a disability rights activist, TEDx speaker and founder of December 3 movement. To our shock Deepak took to social media platform Facebook to post a video showing police officials misbehaving with him during Chennai vs Mumbai. the 39 year old Nathan alleged that an assistant commissioner of police (ACP) not only hurled expletives at him but also pushed him.

In his post, the assistant professor of medical and psychiatric social work at Loyola College said that the “ACP abused verbally, physically pushed me despite having a valid ticket”. Nathan also said that this happened when he tried to inquire about disabled-friendly parking. Lashing out at the police officer, the professor said, “Will ever this police officers tried to understand the disabled people do need parking.”

The constable was patiently explaining to me, but the Assistant commissioner sitting in the jeep started yelling at me…” Avana po Sollu ya”….how will i be able to even ask anybody, by not going through the car? I had been rounding and rounding obliging the police but this police officer pushed …..poya….i said oonamutravar!!!! Adhuku ennaya!!!!! ,I told , am a citizen!!! Adhuku !!! Ellavanum than!!!!! Deepak wrote in his facebook post to explain the situation. 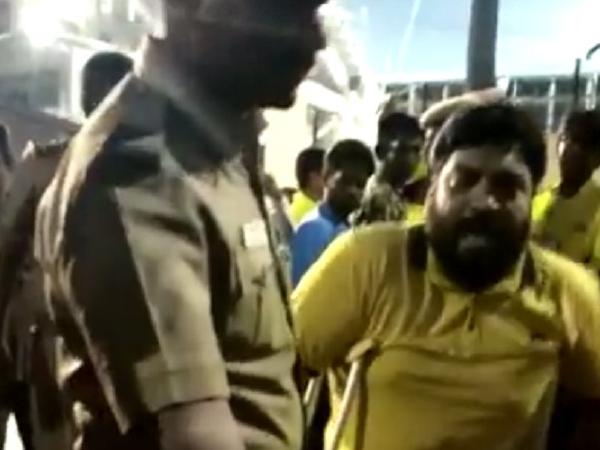 In his twitter post Deepak even questioned the Chennai police by tagging them. He asked “@chennaipolice_ was not allowed to even enquire, “Is there any provision for disabled parking?”. Assistant commissioner abused verbally, physically pushed me despite having a valid ticket.Should we not drive a vehicle? Should v not ask parking? R v not citizens? Prof Deepak”

@chennaipolice_ was not allowed to even enquire, “Is there any provision for disabled parking?”. Assistant commissioner abused verbally, physically pushed me despite having a valid ticket.Should we not drive a vehicle? Should v not ask parking? R v not citizens? Prof Deepak pic.twitter.com/cQu4nqcd1Q

Nathan went further to say that despite a police constable trying to explain the situation to him politely, the senior officer decided to throw his weight around. “How will I be able to even ask anybody, by not going through the car? I had been rounding and rounding obliging the police but this police officer pushed,” said the founder of the December 3 movement for rights of disabled people.

While talking to The News Minute , Nathan asked whether IPL management or Tamilnadu police conducting IPL. No IPL volunteers guided him to park his vehicle which led Police to abuse Deepak. 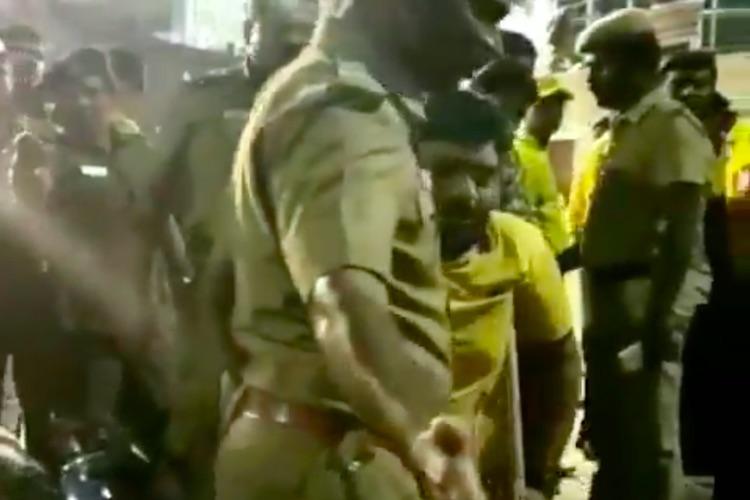 When TNM contacted the concerned officer, he reportedly said that it is a misunderstanding and they wanted him only to be safe at that situation. As he was driving in one way, the Police reported that they only tried to help Deepak.

Previous articleAmit Mishra Tried To Cheat & Got Caught !! Internet Trolling Him Like Never Before !!
Next articleThis Young Director Posts A Hot Picture Of Kajal Agarwal With A Controversial Caption !!

Actress Amala Paul posted the popular art which widely being circulated in social media and conveyed an important message to her followers in the...

Bigg Boss show doesn't need any introduction in country India. After more than 10 successful shows in Bollywood, the expensive show is currently having...