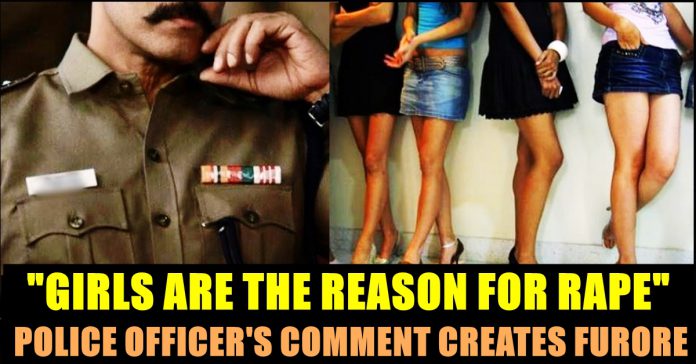 The number crimes against women in India is increasing day by day. The series of recent happenings of rape and murder shook the entire country and is making a very big impact in social media. As the entire Internet is acting against the criminals who are causing the crime, to our shock, an insensitive statement from a police officer creating huge outrage.

The police officer blamed women for the rapes and crimes that are taking place in the society. the police officer who belongs to Gurugram has said that girls who wear short dresses should either be killed by her parents or by her some others.

This regressive thoughts of the police man made people think that the actual problem behind all these crimes is no one but the cops who are supposed to investigate the criminals and get them the punishment they deserve. These statements uttered by the cop in a sting operation conducted by Mirror now.

“I believe that these rapes and gangrapes are not forced but consensual. No man is a monster. Their parents don’t give them proper education, they are not taught how to dress properly. There is no time of sleeping, eating or studying. They themselves invite crimes. Then they say some crimes have happened in front of cops. They ask for it. It takes two hands to clap. The situation is very bad. We cops feel cold but these girls never feel cold. They wear such short clothes,” The policeman said during the sting operation which was caught on hidden camera.

In his series of statements, he further said “I was at Huda City Centre a while back. I have never seen such dresses in my life. You can see their legs up till the waist. That dress had a slit up till the waist. She had two tattoos on her chest. What kind of clothes are these? You can see both the breast. Her parents should kill themselves or she should be killed.”

This created huge outrage and it is still unknown if there is a legal action against him is being progressed or not. Recently a similar statement from a US based Indian created massive outrage. The man was seen preaching women to carry condoms while going out alone to avoid getting murdered. Named as Daniel, the guy is living in Los Angeles.

The man’s post which was in Telugu, advises women to carry condom instead of calling police officers. He wrote it while sharing a post with the same message. In one of his facebook post, the guy even talked about “Legalizing Rape” which is completely absurd. (Read : US Based Indian Asked Women To Carry Condom !! Chinmayi Exposed Him !!)