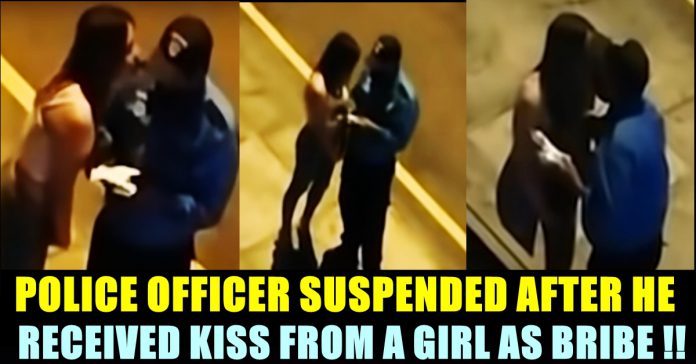 A Police officer from Peru, South Amercia got suspended after he received kiss from a girl as bribe. He was caught on camera and the video clipping is going viral across the globe. The girl, allegedly violated the lockdown norms and the cop was supposed to punish her with a fine. After receiving a lip to lip kiss from the violator, the cop could be seen letting her go which back fired him in big time.

The bizarre incident took place at the Miraflores Broadwalk in Peru’s Lima. It is a local TV channel which streamed the video in their space and caused the police officer an immediate suspension with a pending probe. As soon as seeing the video, higher officials flared up in action, says reports.

The video shows the woman and the officer standing between tow parked cars and the officer, appears to be taking down the details of her to book her and slap a fine on her for breaching the COVID 19 lockdown guidelines. The girl could be seen trying to persuade him. It is not known whether the girl offered to kiss the cop or the cop demanded it from her, the two stars kissing each other in a matter of seconds.

“Our mayor Luis Molina has taken the decision to suspend this officer immediately… There are several infringements. The young woman disrespects social distancing rules and he allows it… Then he takes off his mask to give her a kiss… This action by itself is a very serious one and that’s why he’s been suspended,” said Ibero Rodriguez, a district security in-charge.

The video is doing rounds in social media platforms with reactions slamming the duo for not respecting the law.

An old video of critically acclaimed filmmaker Balaji Sakthivel opening on why he rejected Sivakarthikeyan to do the lead role in his "Vazhaku Enn...