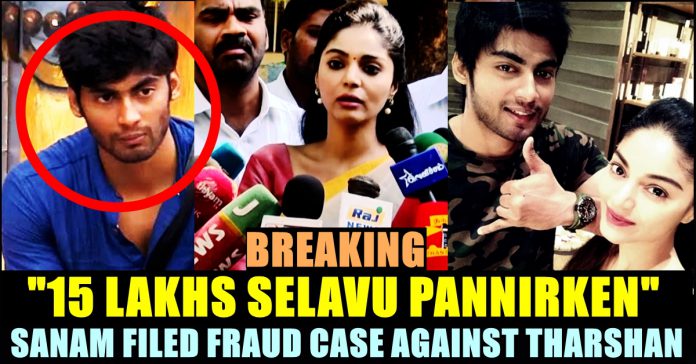 In a major twist in the love tale of Bigg Boss fame Tharshan and popular model and actress Sanam Shetty, a police complaint against the aspiring actor has been filed by the model. She has filed complaint against Tharshan for cheating, fraudulent, breach of trust, women harassment and threatening in the commissioner office, Chennai.

Tharshan is one of the most loved male contestant during the Bigg Boss show, failed to win the title as he got evicted from the show abruptly due to lack of votes. The Srilanka based model impressed audience from day 1. He got more attention when he bravely confronted Vanitha Vijayakumar, one of the experienced and dominant contestant inside the house. During his Bigg Boss stint, Sanam shetty has been giving interviews to youtube channels and about her part in his participation of Bigg Boss.

The actress even produced photograph proofs in front of media and said that Tharshan is treating her badly in the presence of his friends after coming out of Bigg Boss house. “He even accused me of having illicit relationships with the actors I am working with. “From the very first day we met, I have been an actress. Now he reasons my occupation to part with me” worried Sanam Shetty.

“After getting the fame he wanted, he started accusing me by assassinating my character.” said Sanam who revealed that their marriage was supposed to happen on June 10th. When she was asked by reporters whether Tharshan is linking her with actor Simbu, Sanam refused to mention a name.

Watch the video of her press meet below :

Sanam said that she wants Tharshan to accept to all these allegations and added that she doesn’t expect a compensation from him. Sanam further said that he is slowly erasing the trace of her in his life. It is notable that Tharshan recently announced about his first ever project as hero in Tamil film industry.

Through his official Instagram account, in which he enjoys more than 8 lakh followers, Tharshan announced that he is going to make his debut with a grand crew. The Srilanka based model thanked his fans for pouring unconditional love for him and said that it is an unforgettable day in his life.

My life has been blessed. Thank you so much so much guys❤️. Love you all

What do you think on this accusation made by Sanam Shetty against Tharshan ?? Comment your views below !!

In a bizarre report that got updated in a number of reputed media portals, students, hailing from West Bengal are getting "high" by using...