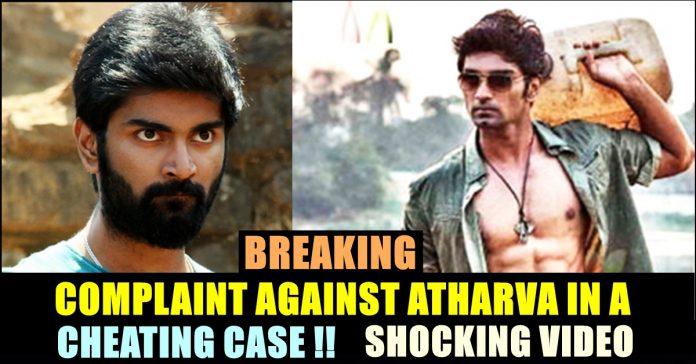 Actor Atharvaa who debuted in tamil film industry through “Baana Kaathadi” became the heartthrob among the girls of Tamilnadu for his handsome look and six pack physique. Being a son of late actor Murali, Atharvaa is very much busy in Tamil film industry and debuted in Telugu lately through the remake of Tamil blockbuster “Jigarthanda” in which he did the role of actor Siddharth.

Having acted in more than 10 films, Atharvaa is known for his dedication in his work which evident through his films such as “Paradesi”. Now to our shock, a police complaint has been registered against the actor by a popular producer and distributor.

Producer Mathiyazhagan of Etcetera Entertainment is the one who complained against the actor in the Commissioner office located in Chennai. The complaint of Mathiyazhagan was regarding the actor causing a loss of Rs.6 crores during the release time of his movie “Semma Botha Agathey”.

On 1 January 2016, Atharvaa launched a new productions studio named as Kickass Entertainment and revealed that he is going to produce a film directed by Badri Venkatesh, who had introduced him in films through Baana Kaathadi. In a turn of events a week later, Atharvaa revealed that he would portray the lead role himself. The film was later titled as “Semma Botha Agathey” and managed to release only on 2018.

After producing the film, Atharva sold the distribution rights of the film to Mathiyazhagan for Rs.5.5 crores. As the film didn’t do well in box office due to unreasonable delays and weak content, Mathiyazhagan happened to face huge loss according to reports.

While speaking to media after giving complaint, Mathiyazhagan said “When I questioned Atharva about my loss of Rs. 5.5 crores, I didn’t get a proper answer from him. I went to producer council to complaint about the same and he accepted do another film for me instead of paying me my money. Then we came to an agreement and conducted Pooja for a new film and titled it as “Minnal Veeran”. For that new movie we have spent Rs.50 lakhs so far”

“But he ended up cheating again without cooperating for the shoot. This makes I have lost Rs. 6 crores of my money because of Atharvaa. When I asked him to return my money, he promised to settle it in 3 months. But it has been 1 long year and I still haven’t received my money. A legal action must be taken against him” added Mathiyazhagan.

Watch the video of the producer here :

The film “Minnal Veeran” was supposed to be directed by “Maragatha Nanayam” fame Saravanan. On the work front, Atharvaa is expected to be seen in Sri Ganesh’s “8 Thottakkal” and “Oththaikku Oththa”. What do you think on the complaint against Atharvaa ?? Comment your views !!

“I Only Watched Vijay Movies In Theatres” – Emerging Filmmaker’s Confession

Director Maari Selvaraj who rose to fame among Tamil audience through his debut film "Pariyerum Perumaal", is expected to create another magic through his...

The ongoing Bigg Boss show went past 50 plus days but didn't see a single "Kurumpadam" so far. Contestants who followed the three seasons...