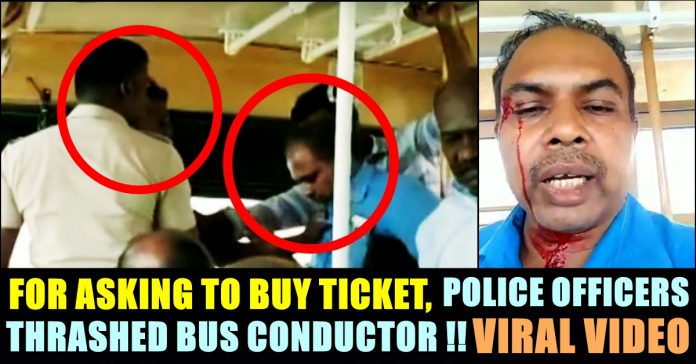 Video of Two armed police guards attacking a conductor is going viral in social media. According to reports, the conductor was attacked because raising question against the police men.

After giving tickets to every other passengers, Ramesh asked them to show the warrants which resulted in an arguments between the trio. According to the report of Samayam, when the argument took to next level, Ramesh abused the police officers as “Mayiru”. Police officers who got angry started thrashing the conductor, video of which is going viral in Internet.

Followed by this, a confession video of Ramesh who got injured near his eyes, surfaced in Internet. In the video he is seen saying that he asked for warrant and got beaten up brutally by the police officers. “When I asked them they are saying that they would do anything as they are police officers”. Watch the video below :

Government bus conductor who asked two personnel of #Tirunelveli Armed Reserve to show warrant for availing free raid was beaten by the duo. The personnel were arrested and departmental action hs been initiated by SP Arun Sakthikumar#PoliceAtrocities #TNpolice @CMOTamilNadu pic.twitter.com/MeLY0aPP0a

After this, driver of the bus went to police station directly, with the instructions of Ramesh who registered complaint against the police officers. Reports says, that a case against Ramesh has been filed for using abusive language as well. This incident created massive outrage in social media platforms and Netizens are fuming against the Police officers as this incident could have been avoided by them if they accepted to receive passenger tickets initially.

Police kaaran ungal Nanban irony revealed in #Thirunelveli. Two policemen allegedly thrash a bus conductor when he asked them to pay for the bus ticket. https://t.co/Svb6H9mijO

What do you think on this issue ?? Comment you views !!

Previous articleThese Stars Couldn’t Believe That Tharshan Got Evicted !! Check What They Have To Say !!
Next articleFollower Trolled Ashwin For His Pose In Instagram !! Check How Ashwin Trolled Him Back !!

On Friday, Tamil nadu chief minister Edappadi K Pazhaniswamy announced that jewellery loans up to 6 sovereigns obtained by farmers through cooperative banks will...

Amidst the controversy that are doing rounds surrounding Ilayaraja's comparison between Dr. Ambedkar and PM Narendra Modi, his son Yuvan Shankar Raja came up...