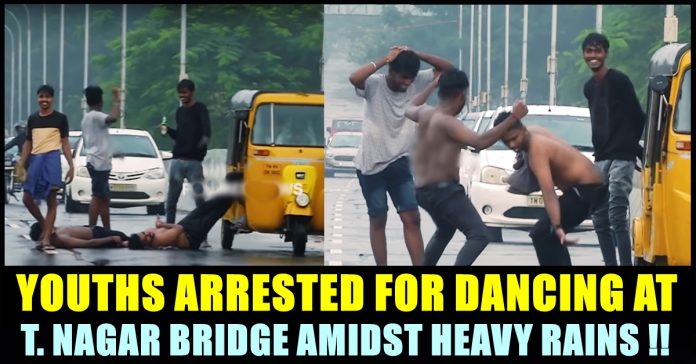 After a video of 6 youths dancing on the bridge that is located near G.N Chetty Road, T.Nagar, surfaced in the Internet, they got arrested by Police officers and are being investigated. It has been reported that the youths were in intoxicated state while performing the dance show at the middle of the bridge where vehicles were halted due to the flood that surrounded the area. Day after the video went viral across the Internet, news on the youths getting arrested has emerged.

The incident happened on Sunday while people in the city were struggling to cope up with the heavy rain that poured throughout the Saturday night. The youngsters were involved in drinking alcohol by sitting on the bridge, says reports. They also harassed people and left in their auto after causing nuisance at the area.

The video shows two of the 6 youths removing their shirts and laying on the road which looks wet due to the heavy rains. One of the youths could be seen trying to climb on the bridge and gets stopped by his friend. They shirtless youths also shook their legs together for a while and grabbed the attention of the passers-by. Polimer news which is famous for reporting such incidents, made the video with a title saying “Drunken Youths performed dance like Mumtaj danced for “Mala Mala Mala Marutha Mala” song”

Many trolled the youths for puling off such a stunt at the middle of the road and make funny comments about Polimer news channel for the BGM they attached for their dance movements. Few demanded legal action against the group of youths and blamed the current government for not closing Tasmacs. Comments on asking Polimer and others to leave the youths alone who are living the moment could also be seen in online platforms.

Now, as soon as the video went viral, report surfaced saying that the youths got arrested by Police officers. Six of the youths were arrested for dancing without shirts on the T. nagar bridge and the investigations are on, according to Polimer.

Most recently, video of men sharing alcohol with the surface surrounded by rain water went viral. The video shows two middle aged men sharing drinks between them by standing in a knee deep water and laughing at the man who shoots them with a cell phone camera.

Previous articleFirst Tamil Film To Grab The Top Spot In IMDB !!
Next articleReactions Flooding In Internet After Makers Of “Jai Bhim” Made This Major Change !!

Fan Couldn’t Believe The Final Result Of Super Singer !! Check How Judge Replied To Him !!

The most awaited finals of Super Singer season 7 telecasted in Vijay Television yesterday. Mookuthi Murugan emerged as the winner of the reality singing...