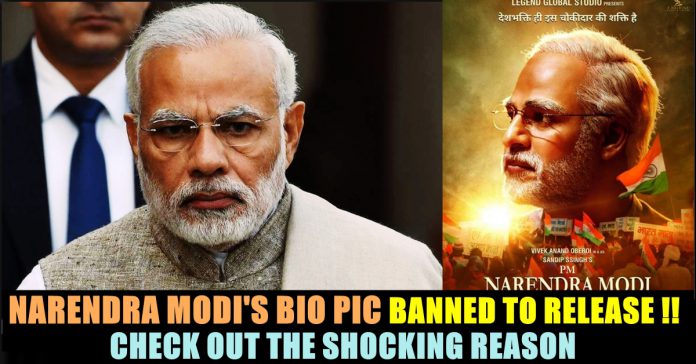 The Election Commission of India (ECI) has stopped the release of biopic ‘PM Narendra Modi’ for the duration of 2019 Lok Sabha elections. In its statement, the election body said that any material disturbing the level playing field in favour of any political party or individual should not be displayed. Opposition parties have been calling for a ban on the movie in view of Model Code of Conduct (MCC). The ECI said that it has also received complaints about ‘NTR Laxmi’ and ‘Udyama Simham’.

“Any Biopic material in nature of biography sub serving the purpose of any political entity or any individual entity connected to it, which has potential to disturb level playing field during the election, should not be displayed in Electronic media including cinematograph during the operation of Model Code of Conduct,” the order reads.

The EC’s decision came on the same day that the Central Board of Film Certification green lit the release of the Vivek Oberoi starrer ‘PM Narendra Modi’ and gave it a U-certificate, which would have allowed it the widest possible release on Thursday, the first day of polling.

The Supreme Court had on Tuesday dismissed a petition filed by a Congress activist seeking a stay on the release of the biopic on PM Modi saying the Election Commission would be an “appropriate” place to seek the redressal.

The apex court said it was not entertaining the petition for the stay on the release of the film which would be “premature” in view of the fact that the movie is yet to be certified by the Censor Board.

He also submitted that the song released with the trailer is BJP’s campaign anthem from the 2014 Lok Sabha elections and Modi’s popular dialogues have been used in the biopic which states “Fakir hun, Jhola uthha ke chal dunga”.

Singhvi said that Prasoonn Joshi, lyricist of the film is the CBFC Chairman. “The visual impact is much stronger”, Singhvi said and added that the term ‘chowkidaar’ is also mentioned in the film with the prefix to the official handle of the PMO.

The senior advocate said that Vivek Oberoi, who is the lead actor is the star campaigner for the party and his father who is the co-producer of the biopic is a card holder of the BJP.

Previous articleDirector Atlee Got Trolled For This Cheap Reason ?? Internet Exploded !!
Next articleKerala Teen Girl Revealed Why She Went On Horse For Her Exam !! This Is Unexpected !!