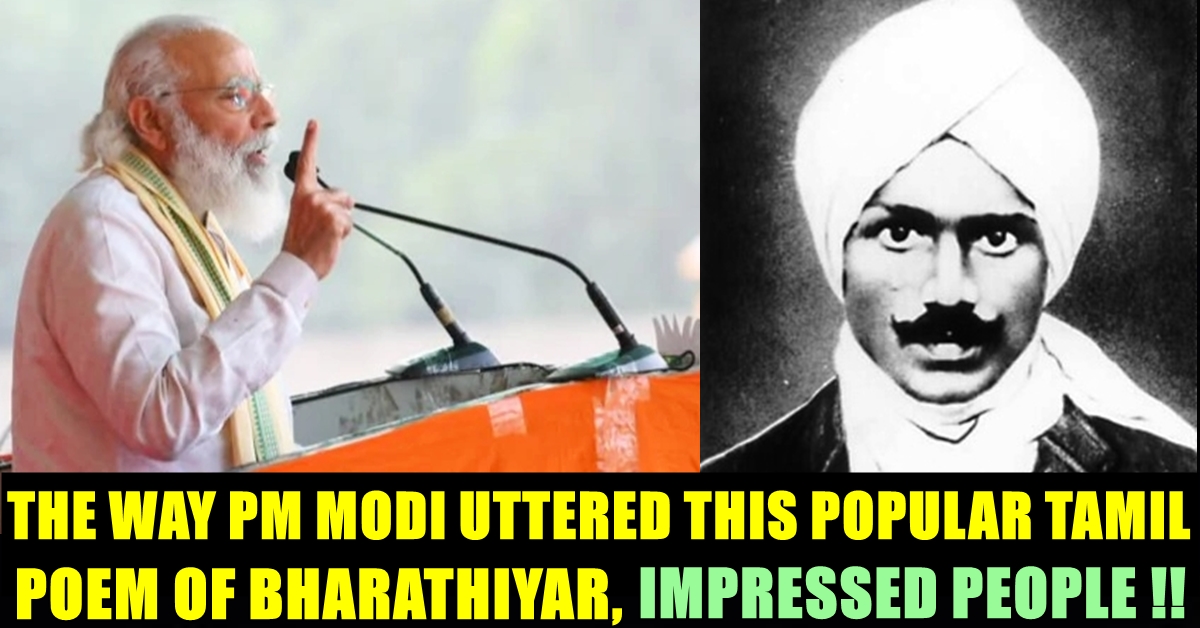 Prime minister Narendra Modi, while addressing the nation on the occasion of 145th birth anniversary of Sardar Vallabhai Patel, quoted a long poem of Tamil poet Maghakavi Bharathiyar and impressed the people of Tamil nadu. The way he uttered the long poem without help, is being lauded by the people of Tamil nadu. He said the popular poem of the legendary poet which starts as “மன்னும் இமயமலை எங்கள் மலையே . . “

Prime minister Narendra Modi, whose two-day Gujarat visit started on Friday, reached the Statue of Unity at Kevadiya in Narmada district this morning and offered flowers at the feet of the monument of Sardar Patel. In the important occasion, Modi slammed the opposition parties for their stand on the Pulwama attack last year, saying the Pakistan minister’s revelations earlier this week in that country’s parliament had exposed the opposition’s real face.

“Today when I was watching the parade of officers, an image emerged in my mind… this image was of Pulwama attack. The country can never forget that when India was mourning the death of its sons… some people were not a part of that grief. They were looking for selfish gain in the Pulwama attack”.

In a sensational admission, senior Pakistan minster Fawad Chaudhry admitted that his country was responsible for the Pulwama terrorist attack in Jammu and Kashmir in 2019 that killed 40 CRPF personnel and brought two countries to the brink of war. In his speech, Modi slammed the opposition parties by saying that the truth of the incident revealed in the Pakistani parliament has exposed them.

Meanwhile, he quoted the popular Tamil poem of Subramania Bharathi who was a Tamil writer, poet, journalist, Indian independence activist and social reformer. He quoted his poem that starts as “மன்னும் இமயமலை . . “ and gave explanation for it in Hindi language.

The way Prime minister Narendra Modi gave importance to Tamil language and Tamil poet, is being lauded by the people of the Tamil speaking state. This gesture from the Prime minister amidst the furore that took place due to Hindi imposition, was welcomed wholeheartedly by Tamil people.

From 101 KG To 71 KG !! Check How & Why Simbu Reduced His Weight !!
Actress Said That She Got Impressed With Balaji Murugadoss !! Got Trolled