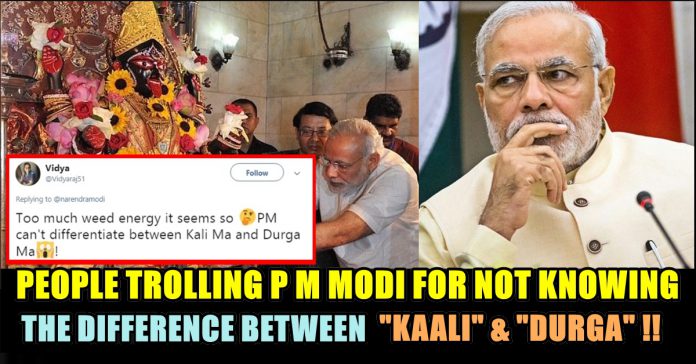 Prime Minister Narendra Modi on Wednesday extended greetings to the nation on the occasion of Durga Ashtami by sharing a picture of himself on Twitter with the message that said, “May Maa Durga Eliminate All Evil”.

However, he was called out for sharing a picture of goddess Kali instead of Durga. Some also pointed out that Modi had actually shared pictures from his 2015 visit to Dakshineshwar Temple near Kolkata. 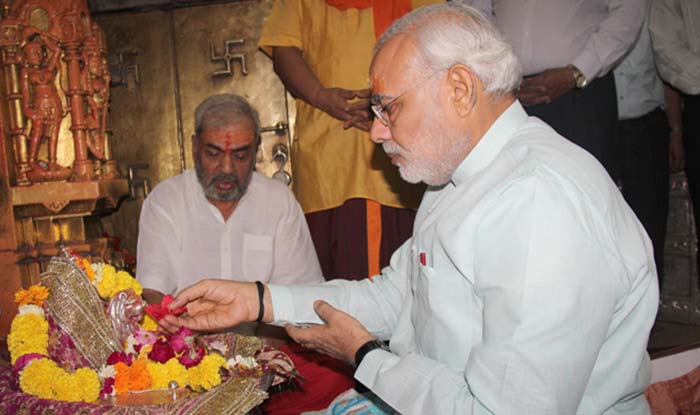 ‘Greetings on the auspicious occasion of Durga Ashtami. May Maa Durga fulfill everyone’s aspirations, further the atmosphere of joy and eliminate all evil from our society. Have a blessed Durga Puja!,’ PM Modi tweeted.

Greetings on the auspicious occasion of Durga Ashtami. May Maa Durga fulfil everyone’s aspirations, further the atmosphere of joy and eliminate all evil from our society.

Have a blessed Durga Puja! pic.twitter.com/gEo6Fw8URW

While some Twitter users mocked the prime minister for not being able to distinguish between the two idols, there were some who pointed out that both the goddesses represented power and, hence, are the same.

Here are some of the reactions:

This idiot doesn’t know the Difference between the Maa Kali Idol and the Maa Durga Idol ..
Gadha Maa Kali is worshiped on a special New Moon Night .. Diwali ..
Navratri is for Maa Durga, Even an Atheist like me knows this
Know #HinduIcons first .. Then shout “I am Hindu, Hindu”.. pic.twitter.com/pgKeFXRWKO

That’s Kali. At least do your research before you start your drama

PM Saheb if that’s Maa Durga then which Goddess is this? 😂😂😂https://t.co/S3De13hQr1 pic.twitter.com/2khk9rvJ5A

Weed of Modiji is so high these days, that he cant differentiate between Maa Durga and Maa Kali

Too much weed energy it seems so 🤔PM can’t differentiate between Kali Ma and Durga Ma🙀!https://t.co/OtcNHCKGve

Those Foolishly Arguing that this picture is of Maa Durga herself
WELL ITS NOT ..
It’s from Kali Temple of Dakhineswar, West Bengal ..
Which Feku visited in Nov, 2015!#KnowYourHinduism first ,,
Learn the Hindu idol names
Then claim to be “Virat Hindu” https://t.co/23jHschuo6

Dude that’s not even Maa Durga..it’s Maa Kali, and Kali Puja is still 15 days away!! atleast know your Gods on whom you are trying to mint votes. https://t.co/G03OC48KaR

After Allahabad, Kaali has now been renamed… to Durga.

Oh !!!@narendramodi ji Yesterday was ‘Durga Astomi’ not Kali puja… in ur pic u r worshiping ‘Maa kaali’ and Ur Msg says about ‘Maa Durga’ ….
You Should know that Every ‘Avatar Of Maa’ is for different Purpose.

Dear @narendramodi , fyi u r worshiping Maa Kali &not Ma durga in the pics. Please atleast brush up ur knowledge with gods and godesses of our Hindu religion.

The prime ministers defenders were countered by others who pointed out that Ram and Krishna are two avatars of the same god and asked whether it was okay to celebrate Janmashtami on Ramnavami.

Previous article16 Y/O Tamilnadu Boy Killed Himself For Bike !! Guilt Killed His Mother During Funeral !!
Next articlePakistan’s Azhar Thought He Smashed A Four & Stopped Running !! Check The Hilarious Run Out !!

People Slammed Abhirami For What Happened To Madhu !! Check How She Handled Them !!

Less than two years after Uber Technologies Inc. entered India's competitive food-delivery business, it's in talks to sell its Uber Eats operations in the...