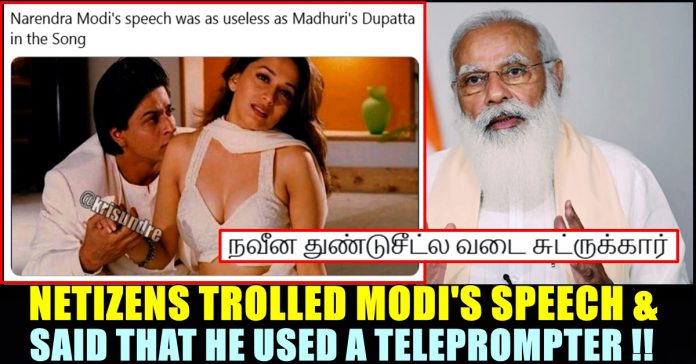 On Tuesday, Prime minister Narendra Modi addressed the nation on the prevailing COVID 19 situation in the country. During his speech, Modi said that the government is working to ensure supply of oxygen, hospital beds and hailed the COVID 19 vaccination programme. He also expressed his sympathies to the families who have lost their loved ones due to COVID 19 virus.

“The demand of oxygen has increased in many parts of the country. The centre, state government, private sector are trying to make oxygen available to all those who are in need of it. Many steps are being taken in this direction” Narendra Modi in his speech and added that the production of medicines in the country has increased comparing to January-February of the year.

“This is a team effort because of which our country was able to kick start two “Made in India” vaccination programmes” Narendra Modi said in his statement. “An important decision was taken regarding the vaccination programme. After May 1, anyone above 18 years could take the COVID 19 vaccination dose” he added.

“I request young women and men in small committees in their localities to ensure COVID 19 guidelines are followed. This would help the government from imposing lockdowns or curfews” Prime minister Narendra Modi said to the people. “I urge the states to consider lockdowns as the last option and focus creating on micro containment zones” he said.

Several kind of reactions keeps surfacing regarding the speech of the Prime minister. A social media user uploaded a video tweet saying that the Prime minister is making his speech with the help of teleprompter. He pointed out the reflection of a digital screen in the specs he was wearing.

“Looks like a Santa. Talks like a Banta.” actor Siddharth trolled the speech of the Prime minister along with several twitter users making fun of it. Many expressed their disappointment over the PM addressing the nation by talking only in Hindi, that too without a translation or translator.

Is Modi's speech meant for Hindians or Indians?

Narendra Modi's speech was as useless as Madhuri's Dupatta in the Song pic.twitter.com/YMKuZBlGrm

Why there is no subtitles for Modi Speech. India is not Hindi mr Modi😒

Modi's speech is like me writing a 6 marker in an exam. No new points, nothing of relevance, just previously established facts and sheer ✨vibes✨

Sanju Samson lit up IPL 2019 with a sensational century, the first of this season. The 24-year-old was in sparkling form, carting the SunRisers...