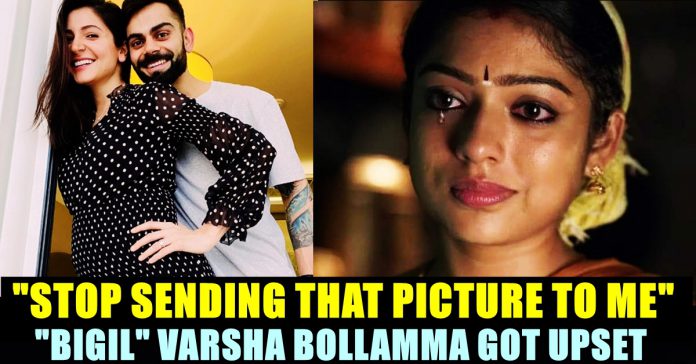 Celebrity couple Virat Kohli and Anushka Sharma made the biggest announcement of their entire life. The couple announced that they are pregnant and are expecting a child in 2021 January. Anushka flaunted her physical transformation through her official Instagram account and made the announcement about her pregnancy. The Indian captain can be seen standing next to her with all smiles in his face.

Kohli shared the same picture with the same caption in his official Instagram account where he enjoys 30 million plus more followers than his wife.

Entire country wished the couple and congratulated them with their whole heart. When Anushka Sharma received wishes from the celebrities of cinema industry, Kohli’s comment section was filled with the wishes of sports personalities.

After being in a relationship for several years, Virat Kohli and Anushka Sharma married in December 2017 at Italy. Amidst all the wishes, actress Varsha Bollamma, Kerala based actress who is known for appearing in “Bigil” as one of a football player, requested her followers not to send the post uploaded by the cricketer.

Through her Instagram story, we could understand that she has been receiving so many messages from her 6 lakh plus Instagram followers updating about Anushka Sharma’s pregnancy. Taking it to her story, Varsha wrote “Guys, please stop sending me Virat Kohli’s latest post, Thank you !!” by tagging the official twitter account of the Indian captain.

The reason behind people storming into her direct message to update about Anushka Sharma’s pregnancy is an earlier twitter post of Varsha through which she revealed that she had a crush on the cricketer. The post which was uploaded by the “Bigil” actress on 14th of April this year, had her scribblings and news paper cuttings of Kohli.

Had a huge crush on @imVkohli back in school 😂 found these today, thanks to the lockdown!!
I designed him a jersey 😂 (I was in the 6th grade so don’t mind the stupid words) pic.twitter.com/nNU9jHupSH

Varsha also posted another tweet saying that she chose 18 to be her jersey number due to her attraction towards the 31 year old cricketer. “And That’s the story behind my jersey number” her tweet read.

And That’s the story behind my jersey number 😋 pic.twitter.com/4nVHlAWCFn

Followers of Varsha could have breached into her inbox to mock or troll her it seems which left her frustrated to an extend she was forced to upload a story to make them stop.