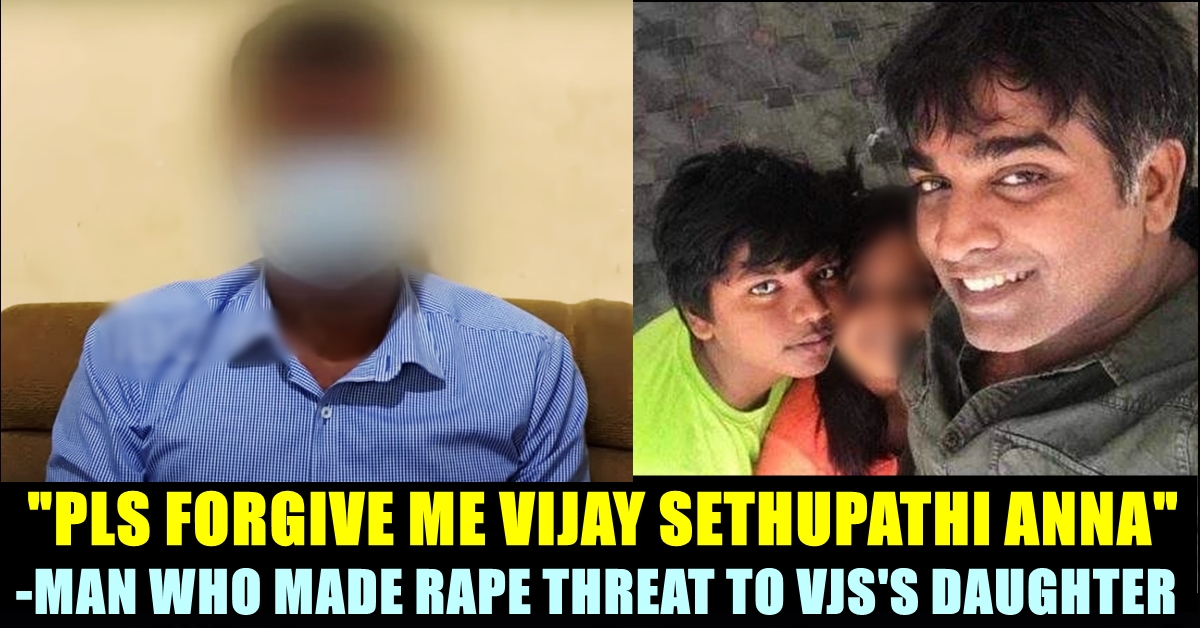 Man who made rape threat to the minor daughter of Vijay Sethupathi released a video making an public apology. He said that he got depressed after losing job due to COVID 19 outbreak and posted such comment after knowing about the project “800”. He seeked apology to the Tamil people, Vijay Sethupathi, his daughter and to his wife. The man whose twitter handle name read “Ritik” said that Vijay Sethupathi’s daughter is like a sister to him.

In a post shared by Vijay Sethupathi about the celebration of his Pizza movie’s 8th year anniversary, the accused wrote a tweet threatening to rape his daughter for accepting to act as Muttiah Muralitharan in his biographical picture. People demanded immediate arrest against the one who posted the comment. He used actor Ajith kumar’s photo as display picture and identified himself as a “Thala” fan.

Days before Vijay Sethupathi announced that he is walking out of “800 the film” after Muttiah Muralitharan requested him to remove himself from the project as he is worried about his future ventures. Hours before the announcement, the disgusting tweet was posted in the comment section of Vijay Sethupathi’s tweet.

The cyber crime unit of Chennai police had traced down the IP address of a Social media user who issued rape threat to Vijay Sethupathi’s daughter. It has been reported that the accused is living in Sri lanka. A latest report said that Chennai Police are reaching the Sri lankan authorities to nab him.

Now, a video of himself seeking apology got released in the youtube channel of IBC Tamil. Along with him, mother of the accused also requested people to forgive her son. “Everyone forgive me. I know there is no forgiveness for the crime I committed. I lost my job due to this COVID 19 outbreak. At that time, I heard about Vijay sethupathi is going to act in a controversial film about the war that took place in Sri lanka.” he said in the video.

“To Vijay sethupathi brother, Tamil people who are living in the entire world, To Vijay sethupathi’s daughter who is a sister to me, to his wife, I am making this public apology. Please forgive me by considering me as your younger brother. I won’t commit such mistake in my life hereafter. My and my family’s future will get ruined if people identifies my face” he said in the video.

Along with him, his mother also appeared in the video and requested people to forgive her son. From national award winning director Cheran to political personalities including Kanimozhi, Vijayakanth, Thirumurugan Gandhi raised voice against Ritik who posted extremely disgustful comment against Vijay Sethupathi and his daughter. They wanted him to get immediate punishment to prevent such crimes taking place in the future. Apart from the comment, “Rithik” made similar comments on various posts of celebrities including Sachin Tendulkar for past several days. South India’s “MeToo” activist Chinmayi also raised voice against him through her tweets.

Though he accepts that he was in a mentally unstable state while posting this tweet, it doesn’t denote that one can post disgustful tweets against girl children when they are in such mental state. Vulgar thoughts and acts against women and children are highly condemnable and people must learn from this and avoid committing such crimes in future.