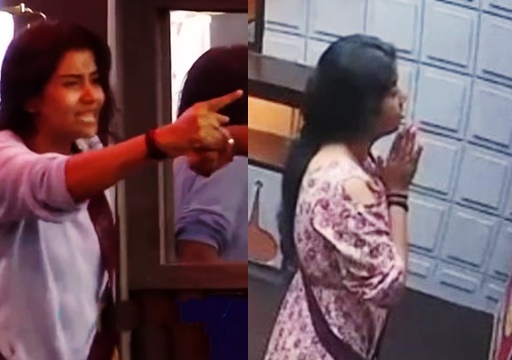 A video of Dhanalakshmi requesting Bigg Boss not to send her out based on her recent behaviour is being widely shared by the viewers of the show with many criticizing her for acting in a strange way in front of her co-contestants and asking apology to Bigg Boss personally.

In one of the recent episodes, Dhanalakshmi said to Bigg Boss that she won’t be eating food or drinking water inside the Bigg Boss house and asked him to let her go out due to the issues she had with her co-contestants.

Moments later, in the store room, Dhanalakshmi interacted with Bigg Boss, saying that made a a mistake by behaving that way and requested him not to send her out.

“Forgive me Bigg Boss, I did the task in a right away but after seeing the behaviour of my co-contestants, I behaved that way. I shouldn’t have said I will leave the house. Don’t get angry. And also don’t telecast this. I have got this opportunity after so much struggle” said Dhanalakshmi to the camera.

“I’m extremely sorry. I did a huge mistake. Please don’t telecast that too. People might get bad impression on me after seeing that. I won’t betray those who helped me to get this opportunity” she said.

Dhanalakshmi asks sorry to Bigg Boss and asks not to telecast this and her saying she wants to go out.

She should not take big decisions like not eating, going out, etc if she can’t follow through.

Here’s how followers of the show reacted to her request to Bigg Boss :

Dhanalakshmi 😈😂..
Today KH sir should warn her for her arrogance speech and irritating attitude..#BiggBossTamil#BiggBossTamil6 pic.twitter.com/uMxc45ezPE

Previous articleOne More Video Of Sathish Making Fun Of An Actress Based On Her Clothes Resurfaced Amidst The Controversy!!!
Next article“Ranjithame” Is A Copy Of “Mochakotta”?? Official Reply From ” Varisu” Team

Fans trying to interact with their favourite celebrities is common in social media platforms. In order to get a single reply from them, we...