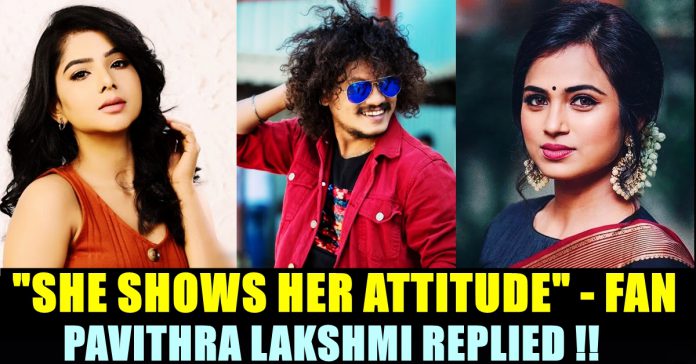 After seeing an Instagram post of a fan page of comedian Pugazh, Pavithra Lakhsmi of “Cooku with Comali” fame came up with an important message to fans through her official Instagram account. Through the post, a fan expressed his dejection over actress Ramya Pandiyan’s participation in the cookery show and said that he wants Pugazh to pair only with Pavithra Lakshmi.

The fan of aspiring comedy actor “Pugazh” criticized the Bigg Boss season four participant by saying that she is showing off her “attitude” in the 45 minute long show. Sharing the post in her Instagram, Pavithra advised fans not to judge the contestants by watching an one hour show and asked them to accept the fact that it as a Television reality show.

The reality show “Cooku with Comali” demands a seasoned cook to join hands with a comedian to make delicious food items in order to impress the judges of the show. The show became a huge hit among the Television and Internet audience. Not only the women, even youngsters including college, school students started celebrating the show as it mainly concentrates on providing humour unlike other cookery shows.

Pugazh who initially grabbed the attention of the audience through his quirky look, made them to celebrate him with his timely counters and mischievous behaviour in the episodes of the show which has chef Dhamu and Venkatesh Bhat as judges. In season one, his antics with actress Ramya Pandiyan in the name of “romance” won hearts.

Recently, the contestants of season one entered the “Cooku with Comali” set as chief guests and did their part for the episode. In a recent episode, Ramya Pandiyan who recently participated in the Kamal Haasan hosting Bigg Boss show and Pugazh paired. On seeing the episode, an Instagram page named “Pugazh Anna FC” came up with a post asking Pugazh not to pair with Ramya Pandiyan again.

The fan said that he likes Pugazh pairing with Pavithra lakshmi and added that he got hurt seeing the 45 minutes episode of the comedian pairing up with Ramya pandiyan. “Thalaivaa I like this pair so much but don’t pair with Ramya Panidyan plsss, she shows her attitude” the post of the Cooku with Comali read.

Pavithra Lakshmi, sharing the story in her official Instagram account and said that it is very easy to compare two people and to find mistakes. She wanted people to realize that it is television reality where contestants try to entertain audience. Pavithra advised public not to take things personally and updated that none of the contestants do it.

Pavithra also termed Ramya as a “Sweet heart” and asked people not to judge an individual just by watching an one hour show. She wanted the audience to spread love as much as possible and said that they could “build” or “break” anyone.

“ITS VERY EASY TO COMPARE TWo PEOPLE. ITS VERY EASY TO FIND MISTAKES. BUT WE HAVE TO REMEMBER END OF THE DAY ITS A TELEVISION REALITY SHOW. AND THE MAJOR MOTTO IS TO ENTERTAIN YOU ALL. PLEASE DONT TAKE THINGS PERSONALLY. NONE OF US OVER THERE DO IT. RAMYA WAS A SWEETHEART ALL ALONG THE WHOLE OF LAST SEASON WHICH I VERY RECENTLY ONLY STARTED WATCHING. DON’T JUDGE SOMEONE WITH JUSTA ONE HOUR SHOW. GIVE ALL OF US ENTERTAINERS THE SAME LOVE AND SUPPORT YOU ALL ALWAYS GAVE. WE ARE NOTHING WITHOUT YOU. U CAN BUILD OR BREAK ANYONE. BUT PLEASE SPREAD AS MUCHLOVE AS POSSIBLE” Pavithra’s story read.

Check out the screen shot of Pavithra Lakshmi’s story below :

Previous articleSivakarthikeyan On Letting Nelson Dilipkumar, Anirudh Take The Limelight In Promo Videos !!
Next articleThey Approached Me To Do “Adjustments” When I Was 20 – Young Tamil Actress !!

“I Can’t Work For BJP In Upcoming Election” Said Gayathri Raguramm !! Check Out The Reactions !!

Nominations for the April 18 Lok Sabha polls in Tamil Nadu came to a close Tuesday, with over 1,000 persons, including two members from...

The entire cricketing universe took notice as Indian Caotain Virat Kohli played one of his best Test knocks in the first Test against England at...