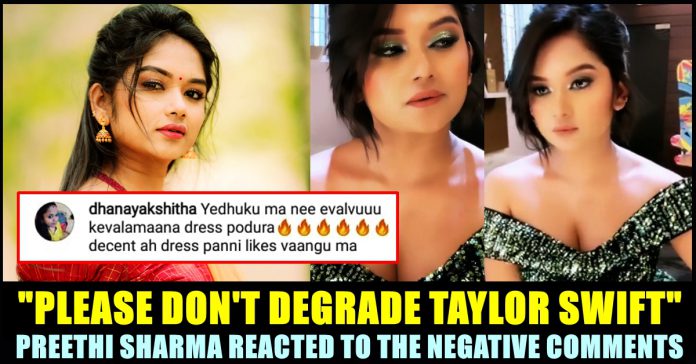 Preethi Sharma of Chithi 2 fame reacted to a negative comment which surfaced on her recent post for which she added a popular song of global icon Taylor Swift. The post showed the serial actress recording a video of herself wearing a glittering frock. with an appealing make over, highlighted by a nose wear. She added Taylor Swift’s Blank Space song in the back ground and added the song’s lyrics as her caption.

Preethi Sharma enjoys 5 lakh plus followers in Instagram after posting 1120 posts. She rose to fame after acting in “Thirumanam” serial as Anitha and became darling of masses through Chithi 2 as Venba Kavin. The actress is pretty much active in social media platforms and is very much interactive with her followers. She is also involved in promoting products through online and through her pictures from the photo shoots she conducts, she enjoys a separate fanbase.

Check out some of the recent posts below :

On seeing her recent reel video, a follower expressed her opinion about the TV actress using the song of Taylor Shift. The follower asked Preethi not to degrade Taylor shift who is known for her looks and style. She pointed how messy Preethi’s video is as she was wearing a nose stud. “Please don’t degrade Taylor swift… she is more popular for her looks and style .With nose stud that too Taylor song …looks like messy” read the comment of the follower.

Defending Preethi, one of her fans jumped in to confront the commenter. “You mean to say wearing Taylor Swift requires additional qualities? It’s not common? Did anytime Taylor came & informed how to carry her own? Why you are degrading someone you don’t like? If you don’t like please be calm instead of spreading negativity.” another follower of Preethi commented. the argument continued as the former replied back saying that she has all the rights to question Preethi for spoiling Taylor Swift’s personality.

On seeing the duo having a verbal spat with each other, Preethi intervened and said “Hi sis u commented what u felt so it’s k it’s ur thought n m happy that u shared so thank u so much for watching my video 😇” to the one who got offended on Preethi using Taylor Swift’s audio and she replied to the other person saying “just leave it it’s their mind their thought b free”

Here’s the screen shot of her replies :

In the meantime, many people could be seen dropping comments, criticizing Preethi Sharma for the cloth she was wearing in the post. They insisted on the actress wearing Saree while clicking pictures to upload in Instagram.