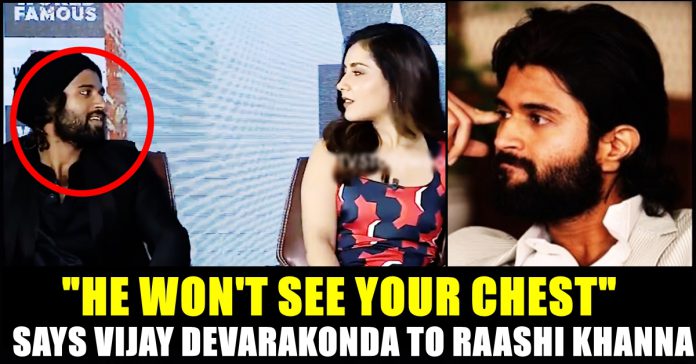 Vijay Devarakonda is currently busy in promoting his upcoming film “World Famous Lover” in which he paired with 4 top heroines of South Indian film industry. The actor who is slowly becoming a darling of controversies, has grabbed the attention of Netizens for the way he talked to Rashi Khanna, in one of the promotional interview of “World Famous Lover” for a Telugu channel.

While Raashi was talking about getting an opportunity to date a doctor, Vijay Devarakonda intervenes and says that a doctor won’t be having enough time to spend with Raashi to which the actress replied by saying “Maybe they will understand us more, We are also actors, we really don’t have the time, right ?”

Vijay Devarakonda who continued to explain the disadvantages of dating a doctor, said “But imagine when he sees you, he will not see your cheeks, but he will see some medical term to it. He won’t see your chest, he will say upper thorax” to which all the three women who were sitting along with him could be seen laughing out loud. The actress replied to Vijay by asking if this is because of his “Arjun Reddy” effect.

One of a fan of Vijay Devarakonda, sharing this particular clip in his twitter account, requested his idol to be responsible as he has lakhs of fans and followers.

Vijay Devarakonda is an South Indian actor who rose to fame through a Telugu film named as “Arjun Reddy”. The film became a blockbuster not only in Andhra but the people of Tamilnadu and Kerala also celebrated the movie and it impressed the youths of the states in big time.

The story which revolves around a medical student, Arjun Reddy and his love affair became a subject to controversies once it reached massive audience. Several other film industries across India wanted to remake the film as a result of which “Kabir Singh” and “Adhithya Varma” happened.

Vijay Devarakonda has been facing criticism since the announcement of his film “World Famous Lover” for acting in same kind of films. After the release of trailer and teaser, fans compared the character of Vijay with the character he played in Arjun Reddy. He also caught in controversy for justifying his role in “Arjun Reddy” to Parvathi Menon in a discussion gathered by Film companion.

What do you think on the way Vijay talked to Raashi on air ?? Comment your views below !!

Previous articleOYO Made History On Valentines Day !!
Next articleMinsara Kanna Makers To File Case Against “Parasite”??

Sivaangi’s Reply To Those Who Call Her “Cringe”, “Fake”

Sivaangi of "Super singer" fame conducted a question and answer session with her twitter followers on Thursday. She answered to most of their questions...

News of famous celebrities meeting their demise spread like wildfire before it turns out to be fake. Another instance happened recently when former Sri...