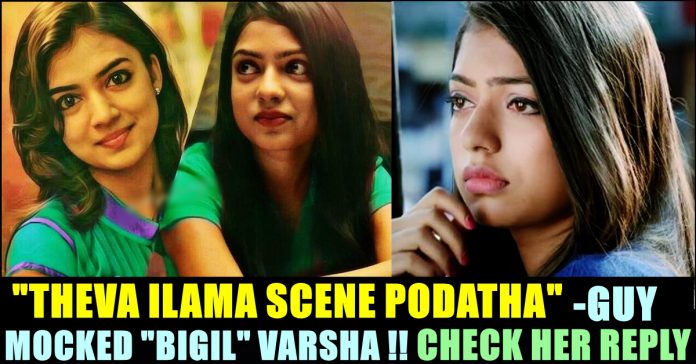 Varsha Bollamma rose to fame among Tamil audience for her role in Vijay starrer “Bigil”, in which she played a role of a pregnant football player. Before getting committed in the Atlee directorial, the actress is very much known for her looks which is similar to Nazriya Nazin, an actress who redefined the term “expression” in Tamil cinema. After acting in very few films in Tamil, Nazriya got married to Malayalam superstar Fahad Fazil and is currently leading a happy life. However, the impact she made among Tamil cinema fans is immortal.

Varsha, before acting in movies, did so many recreations of the dialogues and songs of actress Nazriya impressed the internet users. They started comparing her looks with the “Neram” actress. Check out some of her dubsmash videos below :

After acting in Bigil, Varsha gained a huge number of followers. She is currently enjoying 7 lakh plus followers in Instagram. She is one among those Bigil actresses who are keeping their social media followers busy by uploading posts in regular interval.

In one of her recent posts, Varsha uploaded a Instagram reel in which she can be seen giving various kind of expressions in stop motion short video. Adding the post, Varsha wrote “It’s terrifying how fast time flies by” as her caption.

A similar video of Nazriya Nazim did rounds in social media platforms earlier this week. Check it out below :

On seeing this recent post of Varsha, one of her follower, sent her a couple of messages asking her to act mature. He said that he doesn’t like her involving in such kind of activities. “Theva illama scene podatha” he said to the actress.

Varsha gave him a reply asking him whether she asked his permission. The actress also captured the screenshot and let her followers to see his profile. “Tamil Theriyum Poda” she wrote in her story by adding “I usually don’t post such things but look at his audacity”

On the work front, Varsha who was last seen in the telugu version of “96” is expected get committed it more films post lockdown. Comment your views on this reply of the Bigil actress !!