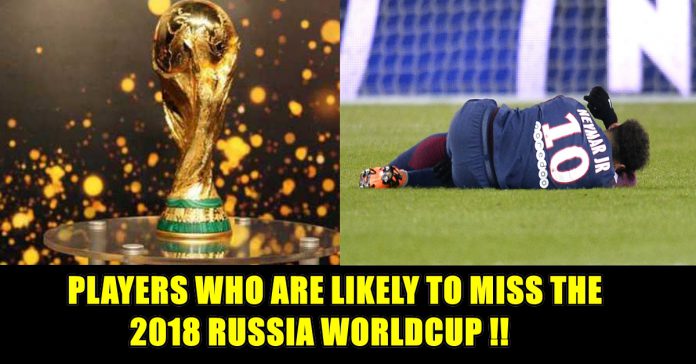 Players Who Are Likely To Miss Russia 2018 World Cup : Check Out Here !!

The 2018 World Cup is just over a month away and national team bosses are beginning to figure out and finalise the best possible squads to bring to Russia.

In the coming weeks they will be paying close attention to the health of their players because, with plenty of football to be played, injuries will happen, which can throw their plans into disarray.

No footballer – not even the best – is completely invulnerable and sometimes fate can deliver cruel blows to individuals whose talents deserve to be showcased on the world stage. That is simply an unfortunate hazard of the profession. As well as that, personality clashes, bans and other issues can end up preventing players from taking part.

As 32 teams get set for the big kick-off in June, Goal casts an eye over those stars who are major doubts for the World Cup as well as those who have been ruled out completely.

The question of which players are definitely out of the 2018 World Cup will yield a much clearer answer as we get closer to the tournament in June, with coaches generally keen to give their playing pool the best possible chance of making the final cut. However, the cases of some players missing out are understood, if not officially communicated. France are hoping to claim their second world title when they compete in Russia this summer but one man who is almost certain not to be part of that journey isKarim Benzema , who has not featured for his country since October 2015. The Real Madrid star does not hold much hope for the prospect of a recall ahead of the World Cup though, explaining his view that he will not be picked as long as Didier Deschamps is head coach.

Laurent Koscielny went down in excruciating pain during Arsenal’s Europa League semi-final second-leg defeat to Atletico Madrid after appearing to lose his footing and the club later confirmed that the defender had suffered a torn Achilles tendon. Unfortunately for Koscielny that means his chances of going to Russia as part of the France contingent this summer are now gone and he faces a number of months in recovery.

England will definitely have to make do without the services of Liverpool midfielder Alex Oxlade-Chamberlain, who suffered a knee ligament injury in the Reds’ Champions League semi-final first leg victory over Roma. The former Arsenal star sustained the injury while making a tackle and it comes as a major blow to both the player and Three Lions boss Gareth Southgate.

Germany boss Joachim Low has a massive pool of talent to draw from, but two potential additions to his World Cup panel have been ruled out. Bayern Munich winger Serge Gnabry , who is on loan at Hoffenheim, has been laid low with a groin injury, while Borussia Monchengladbach captain Lars Stindl, who played a key role in the 2017 Confederations Cup win, has suffered a serious ankle injury.

There had been vague suggestions – encouraged by the man himself – thatZlatan Ibrahimovic could potentially make a return to the Sweden set-up for the World Cup, but the Swedish FA chief, Lars Richt, has ruled out any such possibility. More players will undoubtedly join the aforementioned, particularly those who are considered major doubts to make the plane to Russia (see below), and we will keep you updated.

Five-time winners Brazil head to the tournament as one of the favourites but one of their star players finds himself in a desperate race to recover full fitness in time for the kick-off. Neymar underwent surgery on his foot in March after suffering a fractured metatarsal and a sprained ankle while playing for Paris Saint-Germain. The national team doctor, Rodrigo Lasmar, said that the 26-year-old will be out of action for three months, but PSG have indicated that he will be back with the team in early May.

Germany could well be forced into a defensive reshuffle following the news ofJerome Boateng ‘s thigh injury, which has brought his season to a premature end. The Bayern Munich centre-back is expected to be out of action for between four and six weeks, which means that his involvement in his country’s World Cup defence is in severe doubt. Nevertheless, Boateng remains optimistic and hasvowed to fight for a place at the tournament. In fact, his coach, Jupp Heynckes, says that he sees “no danger” for the defender. Fernando Gago was part of the Argentina squad that finished runners-up at the 2014 World Cup but the chances of him making Jorge Sampaoli’s final 23 for Russia 2018 do not look good. Now playing for Boca Juniors and aged 31, the former Real Madrid midfielder is expected to be out of action until April after sustaining a serious knee injury towards the end of 2017. The Albiceleste are also unlikely to feature Mauro Icardi among their number. Despite his impressive form for Inter, Icardi’s presence in the squad could potentially have a disruptive effect given previous disagreements with key players.

Belgium have no shortage of attacking options at their disposal, but they may be without Michy Batshuayi , who saw his season ended by an ankle injury, while playing for Borussia Dortmund mid-way through April. However, while the 24-year-old’s season has been brought to an end, Dortmund refused to rule him out of the World Cup .

Iceland will be taking part in the World Cup for the first time in their history but they may have to do so without Everton midfielder Gylfi Sigurdsson. The 28-year-old is undeniably one of the best talents at Heimir Hallgrimsson’s disposal, but a knee ligament injury in March has cast serious doubts over his availability for the tournament in June. Sigurdsson remains optimistic that he will be back to full fitness in time, but history has shown that knee injuries can be particularly problematic. Peru’s Paolo Guerrero  was set to miss the World Cup after being hit with a 12-month ban from football in December for testing positive for performance-enhancing drugs (including cocaine) but that ban was reduced to six months after an appeal. As such, the former Bayern Munich striker could potentially make the tournament, but he would have just a month to prove his worth.

Previous articleMunch Chocolate Given As Prasatham In This “Munch Murugan” Temple, Kerala : Check Out The Reason !!
Next articleThis Railway Station’s One Half Is In Gujarat, The Other half Is In Maharashtra : UNBELIEVABLE !!

Old Video Of “Erode” Mahesh Talking About The Struggles Faced By “Vadivel” Balaji !!

Stand up comedian Mahesh who is popularly known as "Erode" Mahesh talked about the struggles faced by "Vadivel" Balaji after having an heart attack...

“I Expected A Lot More From Valimai” – Ajith’s Blockbuster Director

Director Venkat Prabhu who made a blockbuster film like "Mankatha" with actor Ajith kumar, in a recent interview, has said that he expected a...