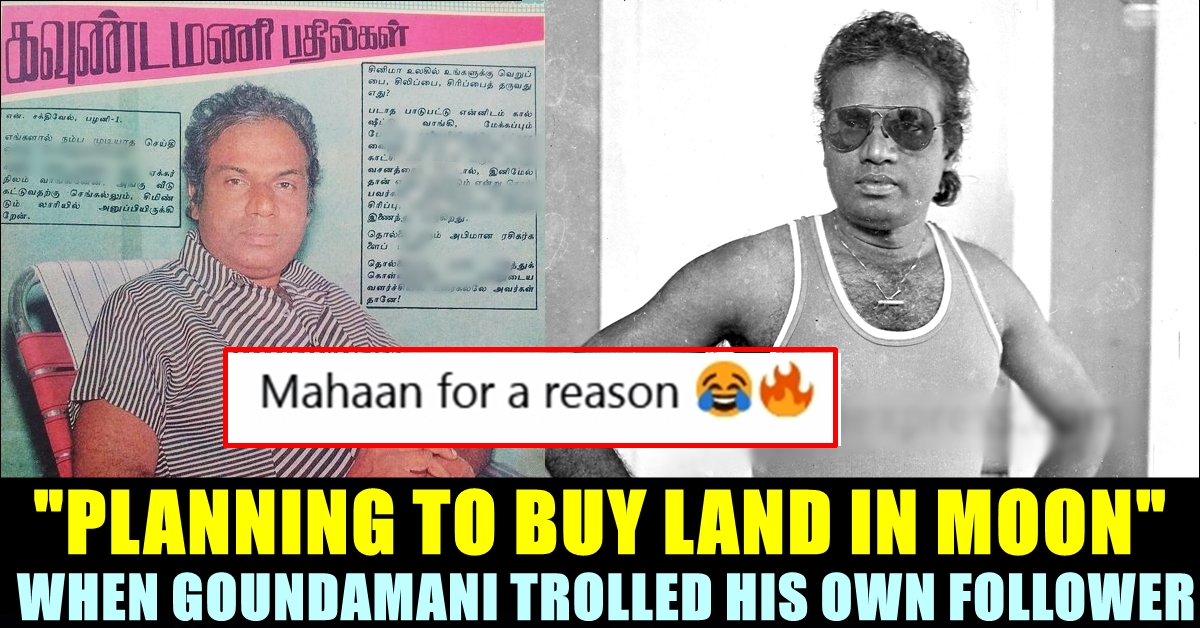 Goundamani who is known for teasing his co-actors in a humorous way, is better known for his comic duo partnership in Tamil films with fellow actor Senthil. This 80 year old veteran comedian is still an inspiration for many aspiring cinema comedians as we can witness his body language in many of the trending comedians today.

His counter dialogues are still used in many platforms to make fun of one another. Now, a number answers provided by the comedy actor, are trending in social media platforms. The way he answered to his fans, has proved that he is someone who is gifted with “wittiness” by the mother nature.

Goundamani has acted more than 700 films. He also portrayed as protagonist in 10 films. Acted in 450 films with his fellow partner Senthil. His real name is Subramani Karuppaiya. It is director Bharathi Raja who changed his original name and kept his screen name as “Goundamani. He is the only Kollywood actor who said that he wont act in any other language film other than Tamil.

He who always stayed away from media, seemingly has spent his time to answer his fans through print media back then. In a picture which is going viral in the social media platforms, the comedy actor has answered to his fans in a most hilarious way.

One Sakthivel from Pazhani had asked the comedian to tell something that people couldn’t believe. Replying to him, Goundamani said that he bought an acre of land in the moon and sent bricks, cement through a lorry to build a house there.

Another fan asked which makes him laugh, bore and frustrate at the same time in cinema industry. The veteran comedy actor, trolling the makers of Tamil cinema, said that he would feel those emotions while seeing people who bought call sheet from him and make him wait a whole day only to say that they have to complete the dialogues yet.

One more fan asked him to comment on his fans who bother him a lot. Goundamani answered to him saying that he won’t see them as a “disturbance” as they helped him grow.

These answers of the comedy actor is still tickling the laughing bones of the Tamil cinema audience. “படிக்கும் போதே அவருடைய slang மனசுக்குள்ள ஓடுது” said a fan after reading these answers today whereas another one said “Mahaan for a reason”

Mahaan for a reason 😂🔥