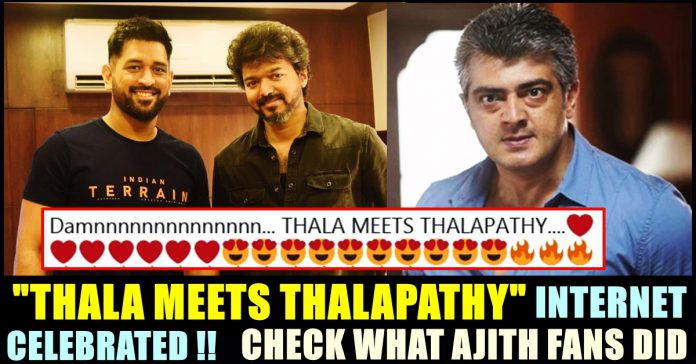 As soon as the pictures went viral, a number of fans started sharing them with the caption “Thala-Thalapathy”. It is very well known that Dhoni is being called by the Tamil nadu cricket fans as “Thala” which means “leader”. It is also notable that actor Ajith who is fondly called as “Thala” by his fans, is being considered as the rival of actor Vijay. Now fans of the “Mankatha” actor has been sharing tweets saying that “Ajith” is the one and only “Thala” and are involving in verbal spat with Vijay fans who deliberately term Dhoni as “Thala” in order to dethrone the title from the rival of their favourite star.

It has been reported that Vijay was busy shooting for his upcoming film “Beast” at Gokulam studios where Dhoni made his presence for the shoot of a commercial. The last time Dhoni and Vijat met each other was, during the inaugural season of India premiere league. Actor Vijay was appointed as the brand ambassador of team Chennai Super Kings which is being led by Dhoni till today. The old pictures of the duo together is also trending in social media platforms right now.

Check out the pictures below :

On seeing the enormous number of posts which termed Dhoni and Vijay as “Thala and Thalapathy” respectively, fans of actor Ajith got triggered and started trending that “Only Thala is actor Ajith”. This is not the first occasion where Ajith fans emerging against Dhoni for being called as “Thala” as during every July 7, a trend will take place in Twitter hailing Ajith as “Thala”. “Orey Thala Ajith” is currently trending as an effect of the Vijay-Dhoni union.

We Are Here Only For Our THALA #AjithKumar ! We Will Be Here Always For Him & His Movies ! #ஒரேதலஅஜித் #Valimai #ThalaAjith pic.twitter.com/zd49lojJK8

#Thala Ajith is a brand💥🤫