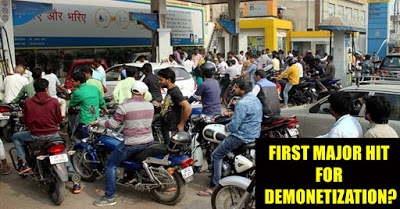 Yes. You read it right. Starting from Monday you won’t be able to use cards in petrol pumps. Read below to know more. From the November of last month, the demonetization wave has been hitting India pretty hard. People have slowly started adapting to the digital money schemes from then. Though the daily lives of the citizens are at stake due to lack of liquid money at unavoidable circumstances, people still move on, depending on POS and mobile wallet transactions for their daily needs.

Among these, petrol and diesel have been irreplaceable due to the huge amount thrown in for a small need. But starting from Monday you won’t be able to use both credit and debit cards in petrol pumps. This is owing to the fact that the government has levied a 0.75% discount to those using card payments and now they demand an 1% service charge for every transactions made. The petrol pump owners have filed a complaint saying they’ve been a loss owing to this since the discount and service charge are deducted from their profits.

This new announcement brings a major hit to the Digital India scheme of Prime Minister Modi. After the constant pain incurred by the citizen due to the shortage of limited money(Only Rs4500 was allowed to be withdrawn per day ), this announcement is expected to invoke more protests. Would this go on to take many more major hits in the future is what only time could unveil.