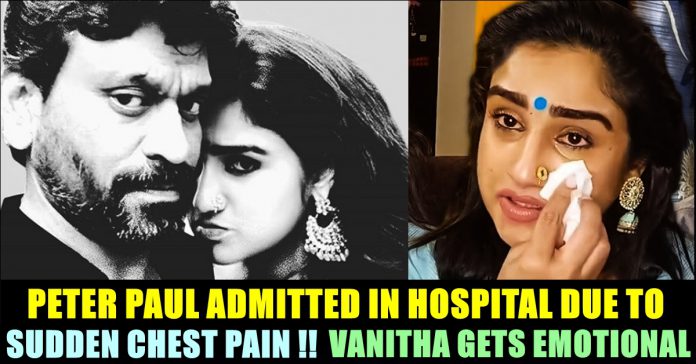 Peter paul, romantic interest of actress and Bigg Boss fame Vanitha Vijayakumar admitted in Porur Ramachandra hospital due to sudden chest pain, according to reports. As soon as the news surfaced in Internet, Vanitha Vijayakumar came up with an emotional tweet, seemingly hinting about her current mind state. Peter Paul is a VFX artist who is also an aspiring filmmaker. He met Vanitha Vijayakumar for the first time to narrate her a role in his upcoming debut film. However, he ended up helping Vanitha Vijayakumar to run her youtube channel due to the unexpected lockdown implementation.

Vanitha Vijayakumar successfully got married to Peter Paul on 27th of June month and the pictures and videos of the event went viral across the social media platforms with various kind of reactions. The marriage took place in the house of Vanitha Vijayakumar in a traditional Christian ceremony. The couple celebrated the ceremony with champagne bottles and kissed each other as soon as announced as husband and wife. The marriage was conducted only with close group of friends due to the COVID 19 pandemic.

Vanitha said that she is nearing 40 years now and this lockdown helped her to get a clarity. “He stepped in as a friend and helped me when I was lost without any technical support for my Youtube channel during the lockdown” Vanitha said about Peter Paul.

Followed by the alleged marriage event, a huge controversy took place as Peter paul’s first wife approached media demanding her husband. It blew up when Producer Ravindran, Kasthuri and Lakshmi Ramakrishnan came in to the scene to help Elizabeth helen. Peter Paul was forced to appear for an interview with Vanitha Vijayakumar and they both justified their decisions in that interview which was streamed in the latter’s youtube channel.

Now, the shocking report has suggested that Peter Paul got admitted in Ramachandra medical hospital due to sudden chest pain. In the meantime, Vanitha came up with a tweet writing “Lots to say…nothing I can..god is great..believe..everything happens for a reason…life is tough ..face it..when u do..trust me ..everything will be ok…get tough..hit back…show the world you can..”

Previous article“I Don’t Like You For Your Over-Acting In Super Singer” – Follower !! Nakkhul Replies
Next articleVanitha Vijayakumar Replied To Those Who Mocked Her During Her Tough Time !!

Dubsmash Fame Mirnalini Is All Set To Make Her Debut On This BIG Director’s Film !!

Mirnalini Ravi, a popular Dudsmash artist is all set to take a plunge into Kollywood. The young girl whose name is quite popular in Dubsmash...

Despite of his on and off batting performance for Kolkata Knight riders, Dinesh Karthick is winning the hearts of Tamil speaking IPL followers through...