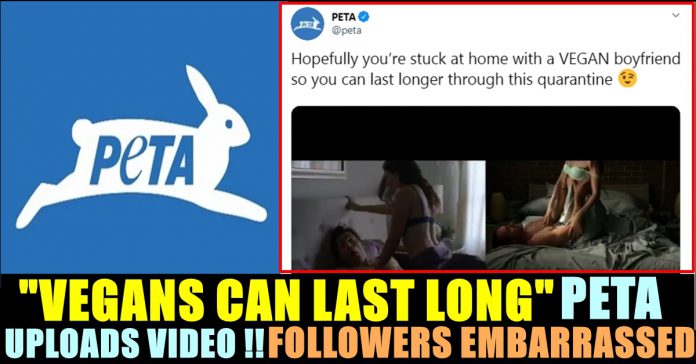 People for the Ethical Treatment of Animals organisation which is also known as PETA shocked its followers through one of a recent social media post. Being the largest animal rights organization in the world, with more than 6.5 million members and supporters, PETA reports to one million followers in the micro blogging social media site. The official twitter, on 23rd of match posted a compilation of two videos showing how long “Vegans” would “last” in bed.

The post which is also happens to be a post about the current “Quarantine” crisis due to the deadly COVID 19 said “Hopefully you’re stuck at home with a VEGAN boyfriend so you can last longer through this quarantine” in its caption. Check out their post below :

Hopefully you’re stuck at home with a VEGAN boyfriend so you can last longer through this quarantine 😉 pic.twitter.com/RM9I90rA9X

This post surprised many of the 10 lakh followers who are following the account by believing that it is going to give them information about how important it is to save animals. Few of them even started raising questions against it. “Stop brainwashing people! This is not true.” wrote one of a follower in the comment section whereas another one asked “Is this a joke”

Is this a joke

Stop brainwashing people! This is not true.

PETA is legitimately trying to use sex to promote its brand.

Please take down this ad. It's beyond disgusting and beneath you.

Add this to the list of reasons not to respect PETA

People across the world are requested to self quarantine themselves to prevent spreading the Coronavirus. So far the virus killed more than 14, 000 people around the world. PETA is a firm which often subjects to controversies, both inside and outside the animal rights movement. It is highly believed that they are trying to get the animal rights message out to as many people as possible. As a result of it, PETA is largely relying on free advertising through media and social media coverage. “Animals are not ours to eat, wear, experiment on, use for entertainment, or abuse in any other way.” says their slogan.

Comment your views on the way PETA trying to promote their motto !!