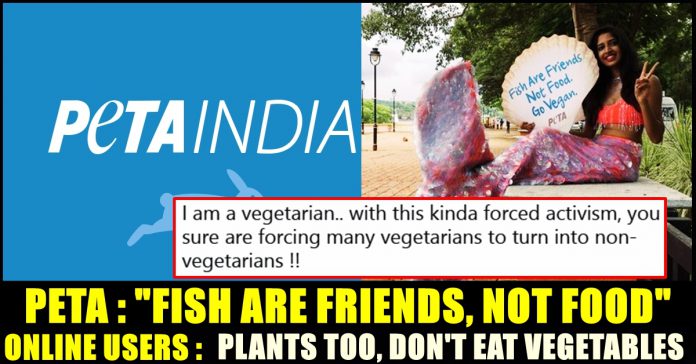 On the special day which is dedicated to the Oceans in the world, A post surfaced in the official twitter account of “PETA India” to create awareness on treating Fish as Friends, garnered special attention from the users of the micro blogging social media site. The tweet received more quoted replies than “likes” as many of them had difference of opinion about not having Fish as Food and treating them as friends. The post contained a picture of a woman donning a fancy cloth like a fish and holding a placard which says “Fish are Friends, not food, Go Vegan”

“Fish are friends, not food. #World Ocean Day #GoVegan” read the caption of PETA India’s post. Check out the post below :

People for the Ethical Treatment of Animals organisation which is also called as PETA, is known for acting against animal violence. “Animals are not ours to experiment on, eat, wear, use for entertainment, or abuse in any other way” is their slogan. Being the largest animal rights organization in the world, with more than 6.5 million members and supporters, PETA reports to one million followers in Twitter and to 1.4 million followers in Facebook. The PETA India enjoys one and half lakh followers in Twitter.

The organisation urges every citizen of our country to contact them if any kind of animal violence comes to our notice in order to rescue them. The most recent post of them about treating Fishes as friends instead of Food, received 1000 plus comments and quoted replies so far with 500 plus likes. Many of them who dropped comments expressed their disagreements with the post.

A follower went on to comment saying “I am a vegetarian.. with this kinda forced activism, you sure are forcing many vegetarians to turn into non-vegetarians !!”

But hey! Smaller fish also prey on worms and other species. Aren't worms our friends as well? So shouldn't we kill (and, may be, eat since we have already killed them) small fish to save our friends? :/ Lots of problems on your theory!

Fish is Food.
PETA is Pest
Tell all your friends to help get rid of the pest from India asap.

I am a vegetarian.. with this kinda forced activism, you sure are forcing many vegetarians to turn into non-vegetarians !!

Stop Eating Plants and Vegetables too.

Name 5 fishes you are friends with https://t.co/jKfxg46shL

Go and tell this to a shark when you are in the water.

The Plastic she is wearing kills thousands of Sea Lives every year https://t.co/JAWrRLluQy

Previous article“Alex Pandiyan” Fame Sanusha Gives Back To Those Who Body Shamed Her After Losing Weight !!
Next articleVanitha Vijayakumar Reacts To The Fake Reports On Her 4th Marriage !!

Check Who Joined The 10 Years Challenge Here !! You Will Go WOW For Sure !!