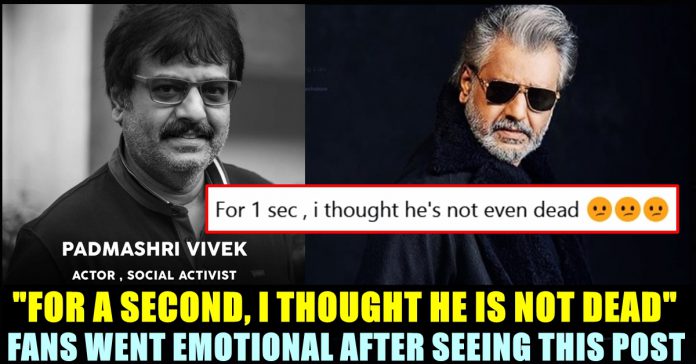 Users of social media platforms left emotional after seeing a “gratitude” post from the social media handles of actor Vivekh who recently passed away after having a cardiac arrest. For acting in the movie “Dharala Prabhu”, Vivekh was named as the Best actor in a comedy role for the year 2020 by the South Indian International Movie Awards. The post which was uploaded to thank “Siima” and comedy actor Yogi Babu for providing the award and receiving it respectively was seemingly written by Vivekh’s daughter.

The demise of actor Vivekh left his fellow actors, fans and Tamil speaking social media space in a dejected state. Vivekh is known for making comedies in his movies with a touch of his lateral thinking ability. He talked about providing education to oppressed children, caste discrimination, superstitious beliefs in Tamil culture, ideologies of reformer Periyaar, dreams of Abdul Kalaam, poems of Bharathiyar and about many other progressive developments for the society through his films.

On 17th of April, Vivekh died in a private hospital after suffering a cardiac arrest. An unconscious Vivekh was brought to the SIMS hospital, a day before. He reportedly suffered a cardiac arrest due to a 100% blockage in heart vessel. “It took nearly an hour for the doctors to remove the block. He was then put on an ECMO. His is an acute coronary syndrome with cardiogenic shock and not related to the vaccine,” Dr. Raju Sivasamy said and confirmed that Vivekh wasn’t infected with COVID 19 virus.

Ever since the actor left the world, fans have been sharing the clippings and dialogues from his films in a way of remembering him. Now, appreciating his acting performance in the “Dharala Prabhu” movie, SIIMA has provided an award to honour him and it was received by Yogi Babu, as per the tweet surfaced in Vivekh’s social media handles.

“Thank you @siima for honouring my dad with the award for Best Actor In a Comedy role – 2020 for Dharala Prabhu. ☺️🙏 Thank you very much @iYogiBabu anna for receiving it and bringing it home. Thanks to the team of #DharalaPrabhu 🙏 As always, grateful and indebted to the fans🙏” read the tweet that surfaced in Vivekh’s twitter and Instagram handles.

Thank you @siima for honouring my dad with the award for Best Actor In a Comedy role – 2020 for Dharala Prabhu. ☺️🙏 Thank you very much @iYogiBabu anna for receiving it and bringing it home. Thanks to the team of #DharalaPrabhu 🙏 As always, grateful and indebted to the fans🙏 pic.twitter.com/FjEncTYwO2

On seeing this tweet, many went emotional and expressed their grief over the loss of the actor. “For 1 sec , i thought he’s not even dead 😕😕😕” wrote a social media user as his comment with many others saying that the actor is still alive in their lives through his comedies.

Check out some of the reactions surfaced in Vivekh’s tweet below :

Celebrities such as actors and sports personalities who are working for India are very much active in social media platforms in order to let...