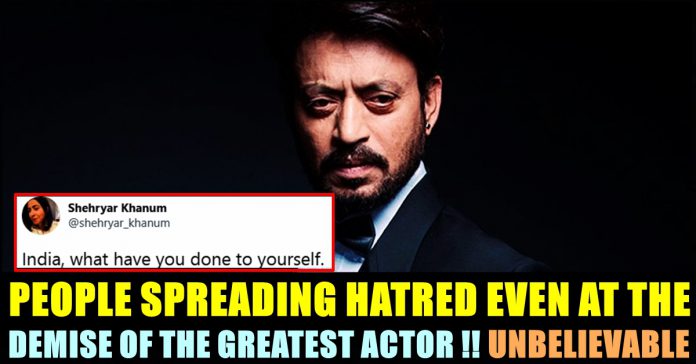 The entire country couldn’t come over the demise of actor Irrfan who left so much memories among us to think of. The actor who is 54 years old died of Colon infection in Mumbai’s Kokilaben Dhirubhai Ambani Hospital on Wednesday. A statement released by his family said that Irrfan spent his final hours “surrounded by his love, his family whom he cared the most”. The actor has been battling the tumour for several months and returned to Mumbai after getting treated in London. Irrfan was married to Sutapa in 1995 and have two sons.

Many celebrities and fans shared their favourite memory with the actor. Tamil director Gautham menon said that he thought that Irrfan would win this battle. Young actor Kartik Aryan said that he still couldn’t recreate a scene acted by Irrfan which he was supposed to do in his first acting workshop. Prime Minister Narendra Modi said that Irfan will be remembered for his versatile performances. Other Superstars such as Kamal Haasan, Amitabh Bhachan also expressed their emotions through their tweets.

Irrfan Khan’s demise is a loss to the world of cinema and theatre. He will be remembered for his versatile performances across different mediums. My thoughts are with his family, friends and admirers. May his soul rest in peace.

This tweet below helped to understand the feeling most of us are going through. Hence had to share.
I was really hoping that he’d win this battle. But I guess there were other plans.
And finally what remains is this thought. Irrfan Khan is, ‘Gone but can never be forgotten’. pic.twitter.com/urSjuay0Oz

Remembering the first time I met Irrfan, for the first reading of QQS. It was his birthday, and the team got him a cake.
07/01/2017. 🤍 pic.twitter.com/gvZOksc3Ef

My first ever acting was in a workshop for my first film where all I had to do was try to recreate a scene of Irrfan sir from Maqbool. And I failed. I keep trying that scene often. And I fail.
First face that comes to mind when we think Actor.
💔 #IrrfanKhan Sir RIP pic.twitter.com/TRs8sXWSHt

Too soon to leave @irrfank Ji. Your work always left me in awe. You’re one of the finest actors I know, I wish you stayed longer. You deserved more time. Strength to the family at this time.

To our shock, there are also people who are finding ways to spread hatred even at the demise of a great actor like Irrfan. A twitter user named as Shehryar Khanum came up with a series of screenshots in which we can see hateful comments against actor Irrfan Khan. One of the comment of a twitter user named as Chandrasekar addressed the actor as “terrorist” and felt happy for the loss. Another one named as “Rocky” considered the demise of Irrfan Khan as good news. He wrote “Rest in hell” to spread hatred against the deceased.

Users of the micro blogging social media site felt extremely embarrassed on seeing such comments. “India, what have you done to yourself.?” asked Shehryar while uploading the post.

India, what have you done to yourself. pic.twitter.com/dYfqv7kP9A

To one of a Twitter user who asked the author of this tweet to ignore such comments, she said that these kind of comments are not supposed to be left alone. “This is not fringe anymore and I am not going to ignore it.” her reply read.

This is not fringe anymore and I am not going to ignore it.

This tweet from Shehryar is being shared by several number of Twitter users. Check out some of their reactions below :

Unbelievable how sick people can be.

This is absolutely inhumane. I don't know what hindutva bigots are celebrating, dude It's not only irfan but every soul shall taste death one day. #ripirfankhan #riphumanity

Ignore these people and India is good.

Being one of the prominent movie reviewers of Kollywood films, Blue Satta Maaran debuting as director and planned to elevate his film career to...