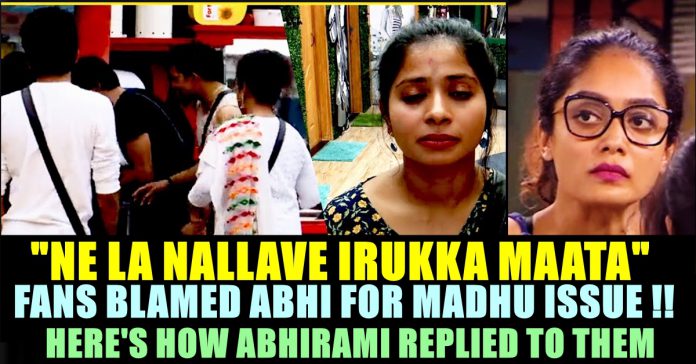 As soon as getting evicted from the show, Abhirami became super active in social media platforms. Initially she posted “Thanks” tweet to everyone for the love she is receiving. In the tweet she said that she is seeing a lots of comments and wishes.

Thanks For Your Unconditional Love 🙏
Seeing Lot Of Comments And Wishes..!!

Followed by that Abhirami visited the former contestant of the show, Mohan Vaithya and his family as per her Instagram posts suggests. By posting few pictures with his family, Abhirami wrote a caption which said “Had an amazing eve … thanks to mohan appa , Rajesh vaidya sir , Charu ma and my cutie maalu ♥️”

Had an amazing eve … thanks to mohan appa , Rajesh vaidya sir , Charu ma and my cutie maalu ♥️

A post shared by Abhirami Venkatachalam (@abhirami.venkatachalam) on Aug 19, 2019 at 6:26am PDT

For this post, Abhirami received enormous number of comments from her followers and few of them questioned the actress about her behaviour inside the house. One of an user blamed Abhirami for what happened to Madhumitha inside the house. 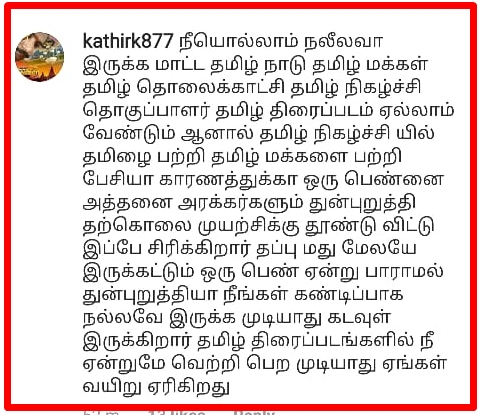 For this Abhirami, in her reply said that Madhumitha is like a sweet child and sensitive. She made it clear that no contestant hurted Madhumitha in any way. She also asked the Instagram user not to comment about it without knowing anything about it.

Another user slammed Abhirami for not supporting Madhumitha. He alleged that Abhirami didn’t have the courtesy to console her. For this tweet, Abhirami, in her reply said that she took care of Madhumitha well and sent her to confession room with Cheran and Kasthuri. He asked the user not to talk much about it and let Madhu take rest. 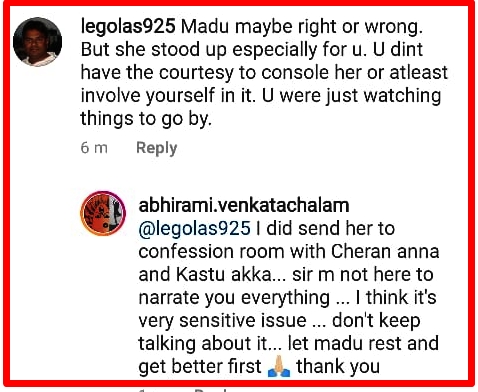 Abhirami replied to one of an user who asked why she avoided Mugen while getting evicted. She said that she didn’t want to hurt him anymore. She doesn’t want any of her feelings to hurt him even when she is not in the house. 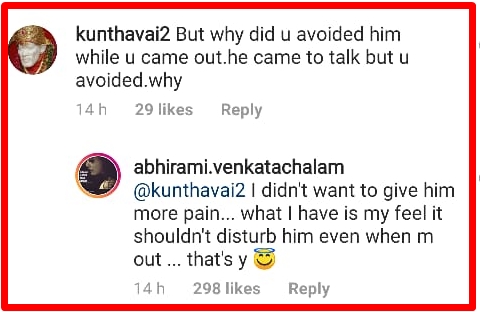 Abhirami was criticized by the audience for confessing that she is in love with Kavin on the first day of the show. Kavin rejected her proposal in a subtle way and asked her to wait for at least 50 days to know about him completely.

What do you think on these replies of Abhi ?? Comment your views below !!