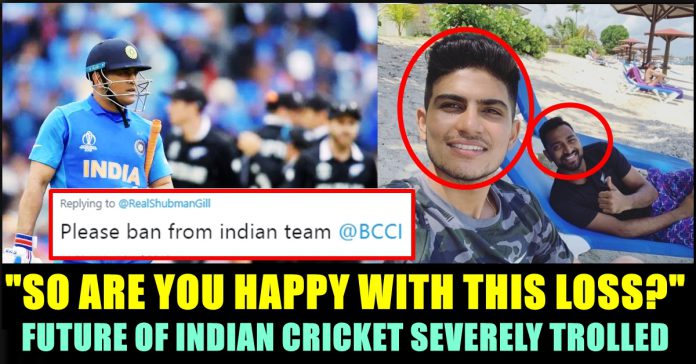 Almost every Indian celebrities and cricketers expressed their sadness over India’s loss against New Zealand in the first semi finals. Starting from tamil actor Sivakarthikeyan to Bollywood topstar Aamir khan consoled the fans for the team’s loss. They also encouraged the team to concentrate on the upcoming events.

No team would hv fought back from 5 for 3..We did..history always remembers the true fighters.. @imjadeja and @msdhoni we are proud of u both and #TeamIndia 👍 Personally became a big fan of @ImRo45 and @Jaspritbumrah93 .. Well done captain fearless @imVkohli 👏👏👍😊

When you top the table you prove you are the best in the world. And a bad day is just a bad day. Team India was the best in this world cup. No doubt. Proud of them. #TeamIndia #bleedblueforever

No words, dumbfounded,can’t blame anyone,team played well, kept us in high spirits, finally the rain was the spoiler and that had the final say, semifinal played in two parts ,cheer up guys, special kudos to Dhoni and Jadeja #indiavsNewzealand @msdhoni @imVkohli #TeamIndia

Well played #TeamIndia throughout the tournament!
We fought hard and took it close.#INDvNZ

So disheartening… But still Great fight & we all are so Proud of you #TeamIndia … Big Salute !!

And somehow felt like crying to see Thala walking out after that run out…. Love you always MSD!! The LEGEND @msdhoni 🙏 pic.twitter.com/CpZYhw287h

Meanwhile Shubman Gill who is considered as the future of Indian cricket seems not really in the mood to react for India’s most important match. The cricketer posted a cool picture of himself with Krunal Pandya in a beach. In the picture both the cricketer seemed very happy.

Shubman Singh Gill is a right-hand, top-order batsman from Punjab. He made his first-class debut for Punjab against Bengal in the 2017–18 Ranji Trophy. He made his international debut for the India cricket team in January 2019. His batting techniques are lauded by veteran cricketers such as Rahul Dravid, Sachin Tendulkar and Sourav Ganguly. Check how fans are reacting to this post :

So r u happy with this loss???

Important that you teach timing to your PR guy.

Bro I think it’s a wrong time to post this kind of pic…Entire nation is sad n heartbreaking…It’s upon u it’s ur life..still as a Indian player n mostly being an Indian U should not post

Previous articleThis Pakistani Player Cursed India For Losing Against England !! Got Schooled By Indian Fans !!
Next articleChinmayi Getting Brutally Trolled Because Of Rakul Preet’s Act !! Check Out Why !!

"We are the Boys" is a gang formed by the five contestants of Bigg Boss Tamil season 3. It consists of Mugen, Sandy, Tharshan,...

Venkat Prabhu is pretty much busy promoting his upcoming film "Manmatha Leelai" by appearing in interviews, uploading tweets, replying to fans in Twitter. On...