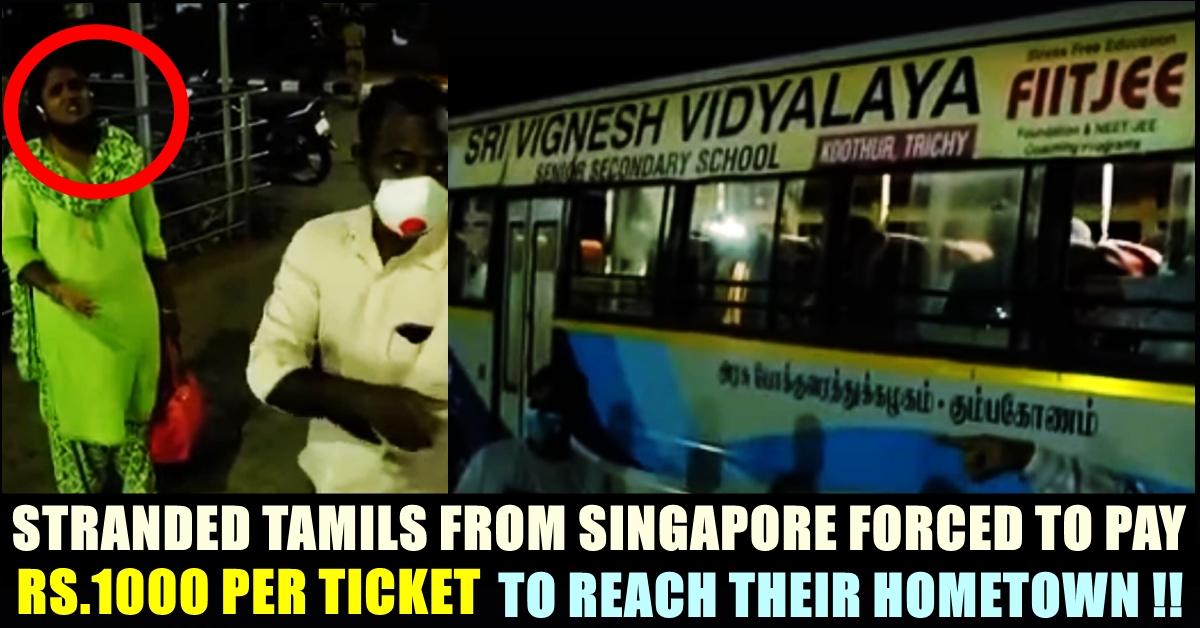 After so many struggle Tamil people who were in a stranded state in foreign countries such as Dubai and Singapore due to the lockdown crisis finally managed to reach Tamil nadu through special flights only to suffer more. Special flights from foreign countries are reaching Trichy airport in daily basis to make Stranded tamil people reach their destinations safely. People who were struggling all these days with expired visas, finally had a sigh of relief after government arranged special flights for them. What they didn’t see coming is the money minded people who are waiting for their arrival to steal money from them reasoning the Corona crisis.

On the evening of Saturday, 175 people from Singapore reached Trichy through a special flight arranged by the government. The government buses which were waiting in the entrance of airport to help the passengers to reach their districts, required excess amount of money from them as ticket price. Passengers were involved in argument with the authorities as they were asked to pay Rs.1,000 per ticket to reach Thiruvarur from Trichy. Usually, passengers will be charged between Rs.150 and Rs.250 to reach Thiruvarur from Trichy.

Dejected passengers started complaining about the money hunt to the media channels. “I came here (Trichy) from Singapore. I was suffering without job for past three months. Now, they are asking me to pay Rs.1,000 per ticket. I don’t have such money. See the bus is full now” said a passenger named as Kalaiyarasan to Sun news.

“When I said I have no money, they kept asking me to wait. One of them said that he will reduce the pay once the bus gets fully occupied. Another one denies it. There is no proper response” said another passenger, Najeem.

Raheeja, an elderly woman cried to the media saying that she has only Rs.250 to reach her hometown but they are forcing her to pay Rs.1000. “they are not even listening to me. I was informed that they will require no charge to travel in bus. Where will I go for that much money now ? I haven’t even consumed any food or drink despite of my hunger as I have no money. I feel drowsy now” she says.

Among 175 people who reached Trichy airport from Singapore, 20 of them were pregnant and 70 others were physically ill. None of them received any kind of discount or offer by the bus authorities. To one of a female passenger who said that she has no money, an authority threatened her to admit her in 7 days isolation ward. People who believed that they will be taken care of in their hometown, left dejected on experiencing such treatment from the people of their own soil.