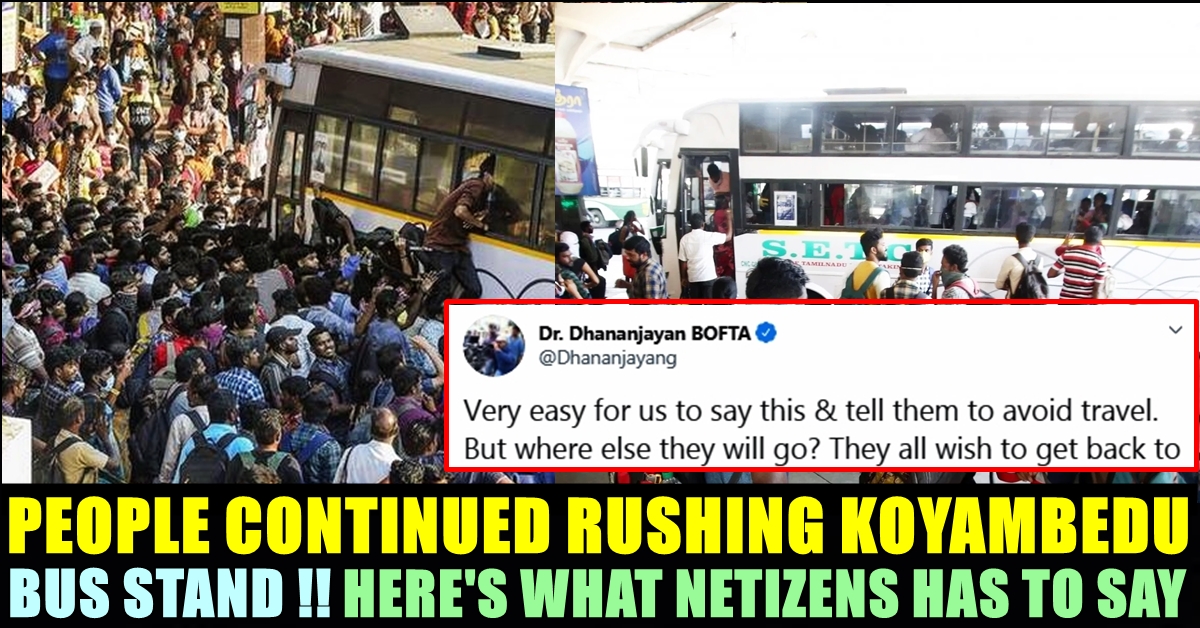 As soon as Tamilnadu government announced lockdown in the state, people who were working in Chennai rushed to Koyambedu bus stand to reach their respective hometowns. Pictures and videos of the same stormed Internet only to create a debate among netizens. One set of people supported the act of the people as they have no other option in this city whereas others slammed them for being irresponsible at this crucial situation.

Chief Minister Edapapdi Pazhaniswamy announced lockdown in Tamilnadu on 23 rd of March and said that it will come to effect from 6 PM on 24th of March. Making use of the one day in between vast number of people from Chennai tried to go to their hometowns in order to be safe in coming days.

Shocking scenes from #Koyambedu bus terminal..
People rushing to their natives after the announcement of 144.

Who will test them now? Looks like something serious is going to happen unless we follow our gvnmt strictly. And it's our duty too..

The main intention of lockdown in tamilnadu is to make people avoid gathering in large groups in public which could cause severe consequences. But people started gathering in large groups as soon as the announcement surfaced in media. Photos and videos of the same started trending in social media platforms with various reactions. As community spread is the major threat for the citizens right now, this act of those people irked others who self quarantined themselves. Meanwhile a set of Internet using people supported the act and blamed the government for their sudden announcement.

What happened in Koyambedu yesterday was unfortunate. Why did Government allow this ? It may turn into Time Bomb

Remember Just one lady was reason for 60% transmission in South Korea ! pic.twitter.com/XJmguWzuDq

A friend of mine is traveling from Coimbatore to Salem, by an overcrowded bus. She knows the risk but she doesn't have any other option. The hostel she was staying is closed. The hostel owner asked everybody to leave the premise yesterday!

Very easy for us to say this & tell them to avoid travel. But where else they will go? They all wish to get back to their home town as Chennai is locking down. With limited bus/travel facility, they are all crowded. We can only pray their safe return & no spread of Corona there✍️ https://t.co/SEUeq0Cnov

We (including me ) blame the general public for gathering large in numbers at CMBT bus terminus but when hostel authorities say that their premises will be closed from today at 6pm due to 144 what students and bachelors are expected to do? Stay in the streets?

What do you think on these many people thronging at the Bus stand at this situation ?? Comment your views below !!

For Requesting People To Stay Home, Manjima Got Abused !! Check Her Reply
MUST READ : List Of Things That Will Be Available During The 21 Days Lockdown !!