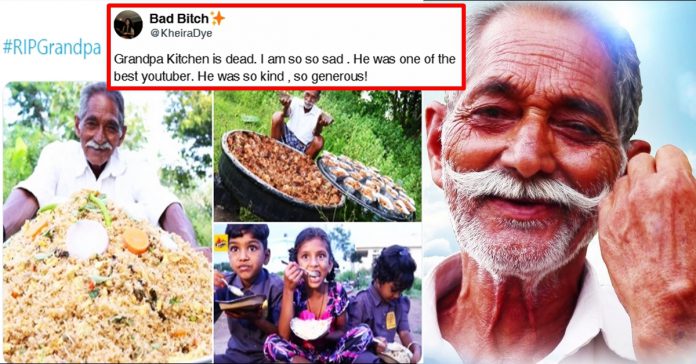 The popular “Grand pa” of “Grand pa Kitchen”, Narayana Reddy is no more. Being India’s favourite youtuber, Narayana Reddy, is known for making delicious meal and for providing it to the unprivileged children and orphans.

The 73-year-old had more than six million subscribers on YouTube. Grandpa would cook everything, from potato wedges to burgers to biryani for the younger lot. The news has shattered fans from India & abroad, as they take to Twitter to mourn his death. Reddy’s iconic one-line, ‘Loving, caring, sharing. This is my family,” at the start of each of his video, will always be remembered.

Here’s some of the tweets on the demise of “Grandpa” :

This made me cry. I was not expecting this. Grandpa you’ll be always remembered.

Help people until you live on Earth.
-Grandpa An#grandpakitchen pic.twitter.com/QTgFQKlc69

Grandpa Kitchen is dead. I am so so sad . He was one of the best youtuber. He was so kind , so generous!
He is used to prepare large meals and share it with orphans. Rest in peace♥️. #GrandpaKitchen #grandpaskitchen pic.twitter.com/BQFW1Xci3E

Omg. Huy seryoso?! 😭
I always love to watch his cooking vlog on yt. Now he’s gone. Cooking will never be the same anymore without him saying the line
“Loving, caring, sharing. This is my family.” 💔#GrandpaKitchen #RIP 🙁 https://t.co/k3ux4A36cg

RIP Granpa 😢 I still love the way you pronounce Cooking ingredients, we will miss you #GrandpaKitchen pic.twitter.com/UCTVYLzjkF

Just found out that grandpa from Grandpa's Kitchen YouTube channel has passed on. This man is a real hero, cooking to feed the less fortunate kids. Loved his videos.

I hope whatever he started is carried on by someone else. RIP grandpa Narayana Reddy, the world has lost a hero. pic.twitter.com/aYepGxBmRf

Grandpa from Grandpa's kitchen is dead. He was the most wholesome man on all of youtube, making large meals which he shared with orphans in his community. Been following him for a long time, and I cant really put into words how painful this is for me.

Started in 2017, “Grandpa Kitchen” found viewers from all over the world who loved to watch Grandpa cook massive portions of meal in just one sitting. Often seen amid a calm backdrop of lush, green fields, his seemingly modest approach to cooking earned Grandpa great popularity on YouTube.

Watch this heart melting video from one of his follower :

‘We entertain people by cooking food and donate the proceeds to charities. Our goal is to provide basic necessities like food, clothing, school supplies and birthday gifts to the orphans’, the bio on Grandpa Kitchen’s Patreon account read.

Let us pray for Grand pa’s soul to rest in peace !!

Previous article“Kaithi” Also Copied From This Cult Classic Hollywood Film ?? Check Out !!
Next articleAnushka Sharma Finally Gives “Savage” Reply To The Allegations On Her Regarding Indian Team !!

Why Tamil Heroines Are Posting Pictures In Black & White ??

As every heroine of Tamil cinema are busy performing the challenge proposed by their friends and colleagues, Actress Andrea came up with a post...