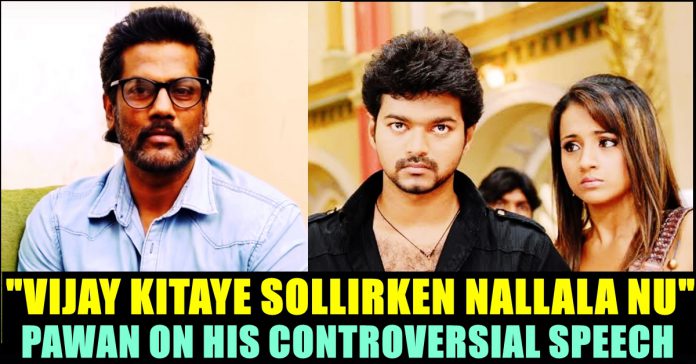 Pawan appeared for an interaction to a youtube channel after his controversial speech in Asuran 100 days celebration. Before starting his speech Pawan has apologized to actor Vijay and the crew of film “Kuruvi” for his way of delivering speech in Asuran event. Pawan has acted in both “Kuruvi” and “Asuran” in negative roles.

In this interaction with Aadhan Tamil youtube channel, Pawan said that his outspoken attitude gained him trouble in several occasions. “I didn’t do it to gain fame. First I want to ask apologize to actor Vijay and the production house and to the director. I didn’t speak that way to hurt any one. I will always ask authorities not to make me speak in functions. What I spoke was completely wrong. I shouldn’t have spoken in a way I speak to my friends in public. Due to my jovial behaviour, it went wrong” said Pawan in the interview.

“I myself a biggest fan of actor Vijay. I defended his films often to those who speak bad of it. I have said my likes and dislikes to Vijay himself in Kuruvi shooting spot. But stage speech requires some dignity.” said Pawan in his interview. As soon as the video got released, it went viral among the fans of actor Vijay. They are sharing the video with various kind of reactions.

This is what, I have been saying last night. @VetriMaaran sir has a huge respect on our #ThalapathyVIJAY and @dhanushkraja was worried about Pawan statement. He's such a GEM. There's a chinese proverb "The tongue can paint what the eye can’t see". #Master pic.twitter.com/PeFMe8Gz7p

Watch the full interview of the actor here :

Actor Pawan who is known for his appearance in Vettri Maaran’s Polladhavan and Vada Chennai has made a controversial statement during his speech. In the movie Kuruvi which was released in 2008, Pawan played one of a villain. Pawan, while appreciating the 100 days run of Asuran, said that Kuruvi’s 150 days celebration was the last time he attended a success meet for a film for its longest run. He further added that he don’t know how far the success of Kuruvi is true which made the people in the hall to laugh.

What do you think on this interview of the actor ?? Comment your views below !!

"Cooku with Comali" fame Kani who got married to director Thiru of "Theeratha Vilayattu Pillai" and "Samar" fame, reacted to the comments surfaced in...

Paksitan Wants ICC To Take Action Against Indian Team Players For This Reason !!

Chaudhry Fawad Hussain, Minister of Information expressed hope that the International Cricket Council will take action against Board of Control for Cricket in India...