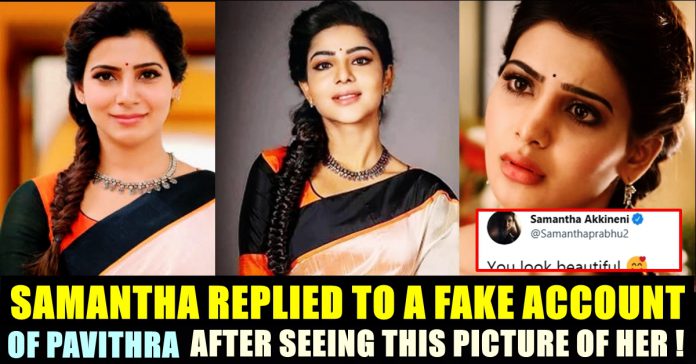 Pavithra’s “Mithra” Look Made Samantha To Reply To A Fake Account Of Her !!

Ever since raising to the fame through “Cooku with Comali” show, the looks of Pavithra lakshmi is being compared to ace actress Samantha. A number pictures of Pavithra from her photo shoots are indeed resembles the looks of the “Theri” actress and to our surprise, Samantha herself endorsed it by replying to a fake account of the Vijay TV fame. Overwhelmed by the tweet of Samantha, Pavithra has been sharing it in her official social media handles and thanking her by clarifying about the Fake account.

Being a model, Pavithra is also a professional dancer and has worked with many prominent choreographers such as Prabhu Deva and others. She is currently enjoying 1 million followers in Instagram after uploading 335 posts and is also involved in endorsing products. Some of the pictures Pavithra uploaded in her official Instagram account resembled the looks of actress Samantha and garnered huge reception from fans as well.

On Friday, a fake twitter account of Pavithra Lakshmi, uploaded a couple of pictures of the “CWC” fame and asked whether she looks like Samantha by tagging the official twitter account of the actress. “maam Did i really looks like you. my all time fav” caption of the fake account’s post read. In the pictures Pavithra could be seen donning the attire wore by Samantha for Theri movie’s Mithra role.

.@Samanthaprabhu2 maam Did i really looks like you 😁 my all time fav ❤️. pic.twitter.com/kwDaX9OXPs

To everyone’s surprise, Samantha who is enjoying nearly 9 million followers, got notified by the tweet and replied to it. She who is not aware of the fact that the tweet got posted by fake account, wrote “You look beautiful” by quoting the tweet which received 20 k likes so far.

Overwhelmed by this reaction of Samantha, Pavithra shared the tweet in all her social media handles to thank Samantha. “Mam thanks a million for your kind gesture. This photoshoot was intended to recreate the iconic “Mithra” and not to forget we are all huge fan of yours. And no mam i am not even 1% of what you are, be it looks talent or versatility. That Id doesn’t belong to me. Thank you mam” Pavithra said.

Mam thanks a million for your kind gesture. This photoshoot was intended to recreate the iconic "Mithra" and not to forget we are all huge fan of yours. And no mam i am not even 1% of what you are, be it looks talent or versatility. That Id doesn't belong to me. Thank you mam❤️🙏 https://t.co/0kWgtRmM4z

Chepauk-Thiruvallikeni MLA Udhayanithi Stalin who introduced a robotic sewer cleaner in his constituency for the first time in state Tamil nadu, is busy shooting...

Team India is struggling and looking for all the ways to draw this ongoing test match by just having four wickets in the hands....